Cultural events in January in Istanbul

The year starts smoothly in Istanbul, the month of January and more generally the winter months aren’t the time of the year of the major music festivals or the great international music concerts, but there is still an interesting eclectic musical and artistic selection. Here are the major musical and cultural events in January in Istanbul:

January 7 – Mozart with the Tepecik Philharmonic Orchestra : percussionist Hamdi Akatay blends Mozart and gypsy music with the orchestra of the gypsy district of Tepecik in Izmir. This is an unusual performance to see at the Babylon Bomonti.

January 7 – Fazil Say New Year Concert : the virtuoso pianist, known for his virulent engagement against the Turkish government during the Gezi revolts, will be on the stage of the Ataköy campus of the Cultural University of Istanbul.

January 14 – Quique Sinesi : the Argentinian, considered as one of the best South American guitarists will be in representation at the Akbank Sanat for a mixture of styles from tango, folk and African music.

14 janvier – Hüsnü Şenlendirici : the best Turkish clarinetist, for whom the clarinet is a family business (his entire family plays clarinet), presents his new album at the Babylon Bomonti., this is a concert not to be missed!

January 15 – Irma : the Cameroonian singer based in France stood out on YouTube in 2011, she has then been known for her elected platinum album “Letter to the Lord” and her single “I know”. She will be on stage at Babylon Bomonti on Friday, January 15th.

January 16 – Chris Botti : the American trumpeter of Italian origin has built a solid reputation in the jazz world by having collaborated with big names in the music industry like Herbie Hancock, Mark Knopfler, Andrea Bocelli and David Foster. He’s in representation at the Zorlu Center PSM.

January 19 – Basel Chamber Orchestra and Helene Grimaud : the orchestra of Basel in Switzerland, considered as one of the best European orchestras, will be accompanied by the French pianist Hélène Grimaud to play Stravinsky, Bach, Mozart and Prokofiev. At the Is Sanat Cultural Center.

January 22 – Ayhan Sicimoğlu & the Latin All Stars : In addition to be part of the group MFÖ, the most famous musical trio in Turkey, Sicimoglu is also one of the most respected drummers in the country. He has also a passion for Latin music and will be at Babylon Bomonti with the Latins All Stars to mix South American music (including salsa and reggaeton) with the Turkish musical traditions.

January 23-24 – Sömestr Fest : Literally translated the “Semester Festival” in English, this music festival marks the arrival of winter vacation for Turkish students. It will host this year the famous Turkish rockers of Duman and Athena and many more… At the Istanbul Kongre Merkezi.

January 28 – Oscar and The Wolf : the Belgian electro-pop band acclaimed for its performance at the Montreux Jazz Festival and The Great Escape will be on stage at Babylon Bomonti .

January 30 – Jean-Baptiste Hardy : the French musician living in Istanbul for several years is also a professor at the School of French music of Istanbul, he will perform with his guitar at the Akbank Sanat to play his melodies influenced by Gypsy music, Bosa Nova, bebop and funk.

January 30 – Wankelmut : the German producer and DJ Wankelmut, known worldwide for its title “One Day” single, has reached the number one spot of the charts in Austria, Belgium, Hungary, the Netherlands, Switzerland, Italy and Germany. He will be at Babylon Bomonti. 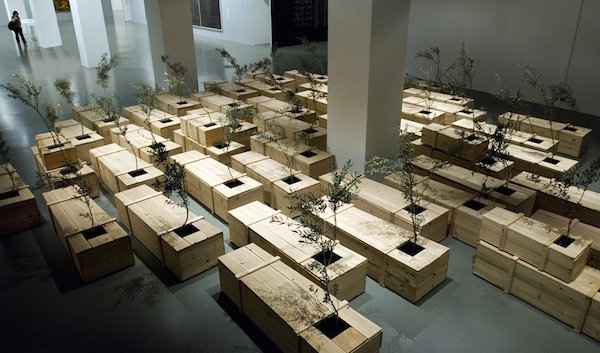 Apricots from Damascus – until February 21st at SALT Beyoğlu

Based on the quote by André Breton “One publish to find comrades!” the SALT Beyoğlu gallery hosts an exhibition on the artistic practice of the Syrians of Istanbul. Indeed, since the beginning of the war in Syria in 2011, more than 2.5 million refugees have flew to Turkey, and the exhibition focuses on a particular group of refugees who depend on their creative and intellectual capacity in areas like art, writing and music to survive in their new environment: the city of Istanbul.

The artist Dilek Winchester has published a fanzine called “Apricot City A4” and sold it on the carts used by the street vendors of Istanbul. Each issue of the magazine has been modified by an artist or a prominent local activist. The curators of the exhibition Winchester and Akin want to create via this exhibition an interdisciplinary space for artists in exile in contact with local artists. More info on: saltonline.org

The the Sadberk Hanım Museum hosts the exhibition Jewel from the 3rd December to the 31st of March. This exhibition focuses on the Ottoman precious objects from the 17th to the 20th century. A total of 139 pieces are exposed. You will find there some wonderful jewels decorated with emeralds, rubies and diamonds but also objects of everyday life such as belt buckles, spoons, pocket watches, inkwells, flyswatters, pipes, tobacco boxes, brooches, medals, slippers… These priceless pieces,  for the complexity of their design but also for the value of the materials used, will not leave you insensitive. More information :www.sadberkhanimmuzesi.org.tr

Bare, Naked, Nude – until February 7th at the Pera Museum

Bare, Naked, Nude is a modern Turkish painting exhibition at the the Pera Museum hold from November 24th to February 7th. Paintings from the late Ottoman period to the beginning of the Turkish Republic are displayed. The exhibition presents artworks made secretly because they are the first Western style naked body paints in Turkish art. The conception of the role of the artist in the society of the time, which was to serve the sultan is interrogated and challenged by these artworks, just as they are rethinking traditional Islamic point of view of the naked body.

If you have questions or need more information to get to these events, and if you want us to add some concerts or exhibitions to our list please email us or leave a comment below.

Passionate about travel, food and news, we created Too Istanbul with the desire to share our love and knowledge of Istanbul to give you the opportunity and desire to participate in the vibrant life of Istanbul, and to make your trip a unique and rewarding experience and not just a visit.

Culinary and cultural walk in Istanbul

Small-group aperitif cruise on the Bosphorus

Discover the contrasts of Istanbul

Asian side of Istanbul: half-day tour to Kadıköy

Create a tailor-made travel to Turkey

Choose the trip that suits you and let us know by filling out the form below. We return to you within 48h with all the answers to start organizing your travel! You can also leave us your phone number if you would like someone from our team to call...

Coronavirus: travel to Turkey in summer 2020

Coronavirus and border reopening: how to travel to Turkey safely? As the whole world continues to face the global coronavirus pandemic (COVID-19), life in Turkey has gradually resumed since June 1, 2020. The borders are scheduled to open in early...

Where to celebrate New Year’s Eve 2020 in Istanbul?

Celebrate the New Year in Istanbul Like every year, many of you ask us the question: "where to spend the New Year's Eve in Istanbul?” In order to celebrate NYE in the only city located on two continents, we wrote you this "special December 31”....