A little history about the wine in Turkey…

The land in Turkey is among the oldest cultivated lands in the world according to archaeological excavations, and the discovery of grape seeds are dating from the first civilizations. Indeed, viticulture has been present in the territory for at least 7,000 years according to the glasses and jugs found during excavations. Among these discoveries, archaeologists found representations of the Hittite kings who offered wine to the gods. The Hittites, one of the oldest known Indo-European peoples from the east, settled in Asia Minor in the third millennium BC. This peoples established themselves as an unavoidable power in the Middle East with the establishment of a hegemony over all of Anatolia and then northern Syria. They competed with the great power of Egypt, and in particular with the pharaoh Ramses II.

It was at the end of the Middle Age that the cultivation of the vine underwent a major upheaval. Indeed, with the conquest of the Ottomans of the Byzantine Empire and the slow Islamization of the majority of the inhabitants, viticulture and the consumption of wine were no longer as dominant as in the past, even if some Sultans liked to consume them. Only the Christian and Jewish communities cultivated the grape to make wine, and most of the vines were being used for the production of fresh or dried grapes. 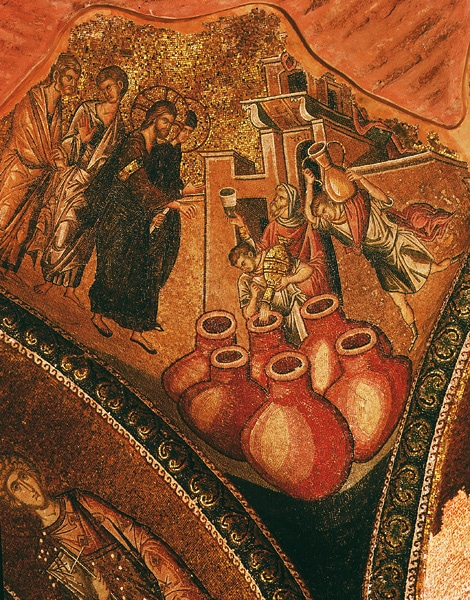 Transformation of water into wine at the wedding in Cana, depicted in a 14th century mosaic at the Church of Saint Savior-in-Chora in Istanbul.

In 1887, phylloxera invaded most of the vines located in Turkey and around the world. This disease caused by a kind of aphids has ravaged and caused the disappearance of most native plants. It first affected the vineyards of France, Italy and Spain during the second half of the 19th century, which then began to import wine produced by minorities in the Ottoman Empire.

Between 1919 and 1922, the Turkish War of Independence broke out and exchanges took place between the Turks living in Greece and the Greeks living in Turkey. The villages and vineyards deserted by the Greeks are redistributed for Turkish immigrants who were generally not used to growing vines but rather tobacco, opium or rice.

Towards a modern face of wine-making Turkey

It was not until 1930 that the wine industry began to develop in Turkey with the support of the general directorate of monopolies. Indeed, 24 companies were created between 1934 and 1936 in various regions of the country, but in reality, the market is still dominated by a few large families. Among them, the company Kavaklıdere was founded by Cenab And in 1929 in Ankara. After taking over the vineyards of the region, Kavaklıdere began to produce Yakut which is one of the most consumed red wines in Turkey as well as Çankaya, a white wine also very popular with Turkish consumers. Another company, Doluca, founded in 1926 by Nihat A. Kutman in Istanbul, planted grape varieties imported from Europe for combinations with Anatolian grape varieties in the Thrace region. Today, the company offers around twenty wines with Villa-Doluca and Doluca, the quality of which is lower for the latter. We can also cite the Turasan and Diren families, whose companies were established respectively in Ürgüp (Cappadocia) in 1943, and in the Tokat region in 1958. 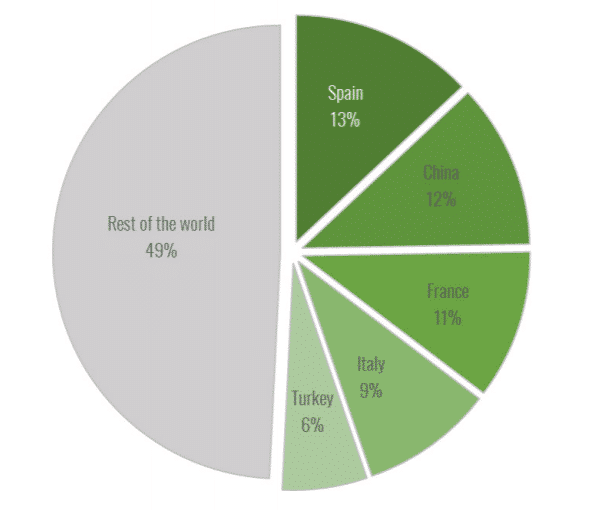 Despite certain obstacles encountered in the past, Turkey has a real potential in the wine sector thanks to the richness of its land, its large vineyards and its different climates favorable to the production of quality wines. Despite advertising bans and taxes on alcoholic beverages in recent years, the production, quality and consumption of Turkish wine is gradually increasing. Turkish wines are winning more and more international awards, and small producers are emerging to offer wines of different varieties.

According to the study conducted by the International Organization of Vine and Wine (OIV), whose balance sheet was published in April 2019, Turkey would hold the 5th position in terms of world wine-growing area behind Spain, China, France and Italy. The global area of vineyards represented 7.4 million hectares in 2018.

This graph represents the wine-growing area intended for the production of wine grapes, table grapes or raisins, in production or awaiting production.

Turkey is not yet known at its fair value for its wine production despite its good vintages, it is especially famous for its vineyards intended for the production of table grapes, but also for its non-fermented drink called Şıra or syrup grape, Pekmez, a kind of molasses generally consumed after eating fish by mixing it with Tahin (a sesame cream).

We can divide Turkey into 5 very distinct wine regions, each with their own specificities:

1) The region of Eastern Thrace

It is one of the regions of the country that produces the most grapes. Indeed, it is almost 20% of the country’s total production. During the Byzantine period of 330 until the capture of Constantinople in 1453, the Church allowed the viticulture of the region to develop.

The grape varieties mainly grown in this region are Cabernet Sauvignon, Chardonnay and Sauvignon Blanc. 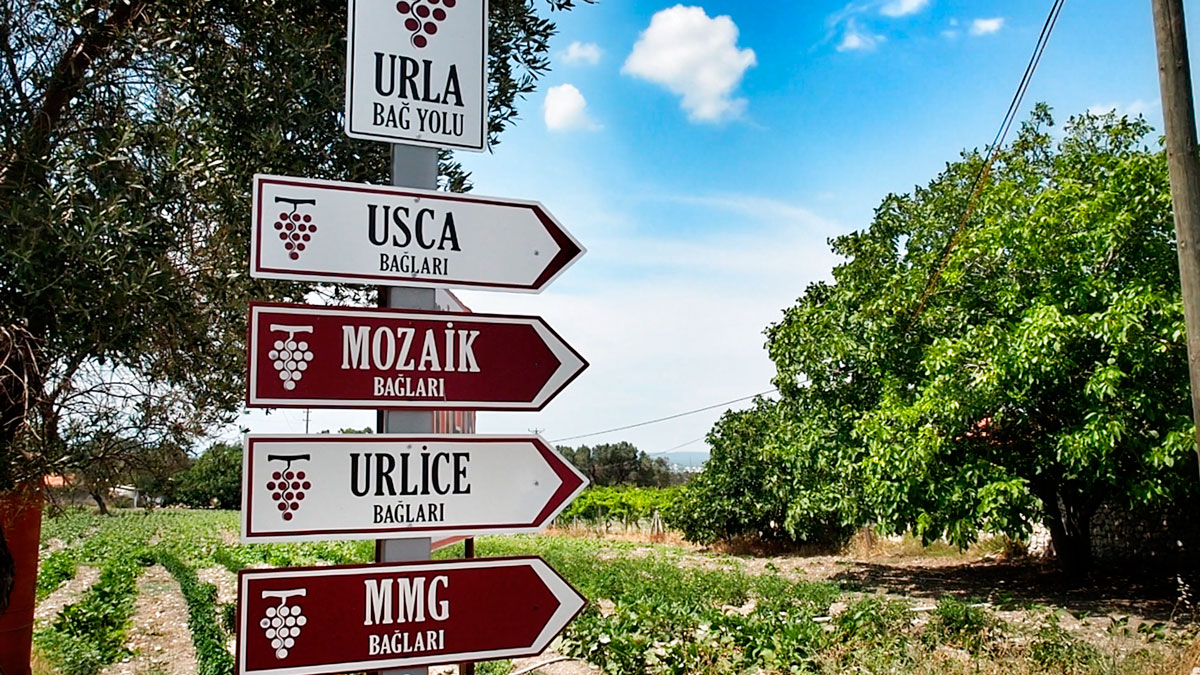 This large region from Çanakkale to Bodrum produces almost 40% of Turkey’s grape production. The climate is hot and dry in summer, and cold and rainy in winter with temperatures that remain reasonable. Close to the ancient vanished city of Troy, the Karasakız variety of grapes is the most important and produces mostly medium-quality table wines. In the province of Manisa, we will find the white grape variety Sultaniye, a name which evokes the vines of the sultan. It is a local grape of the Apyrene variety. This seedless grape is rather used and exported like a table grape but its production in wine brings sweet and semi-dry wines. In the province of Izmir, the majority grape varieties are Misket, Chardonnay and Cabernet Sauvignon. The Aegean region also produces a large quantity of the Çalkarası grape, mainly in the famous Pamukkale region, known for its limestone pools. It is a grape variety that produces young wines with great acidity, mainly used in the production of rosé and red wines. The best Shiraz wines also come from this region, the grape varieties being particularly well adapted there.

3) The region of Central Anatolia 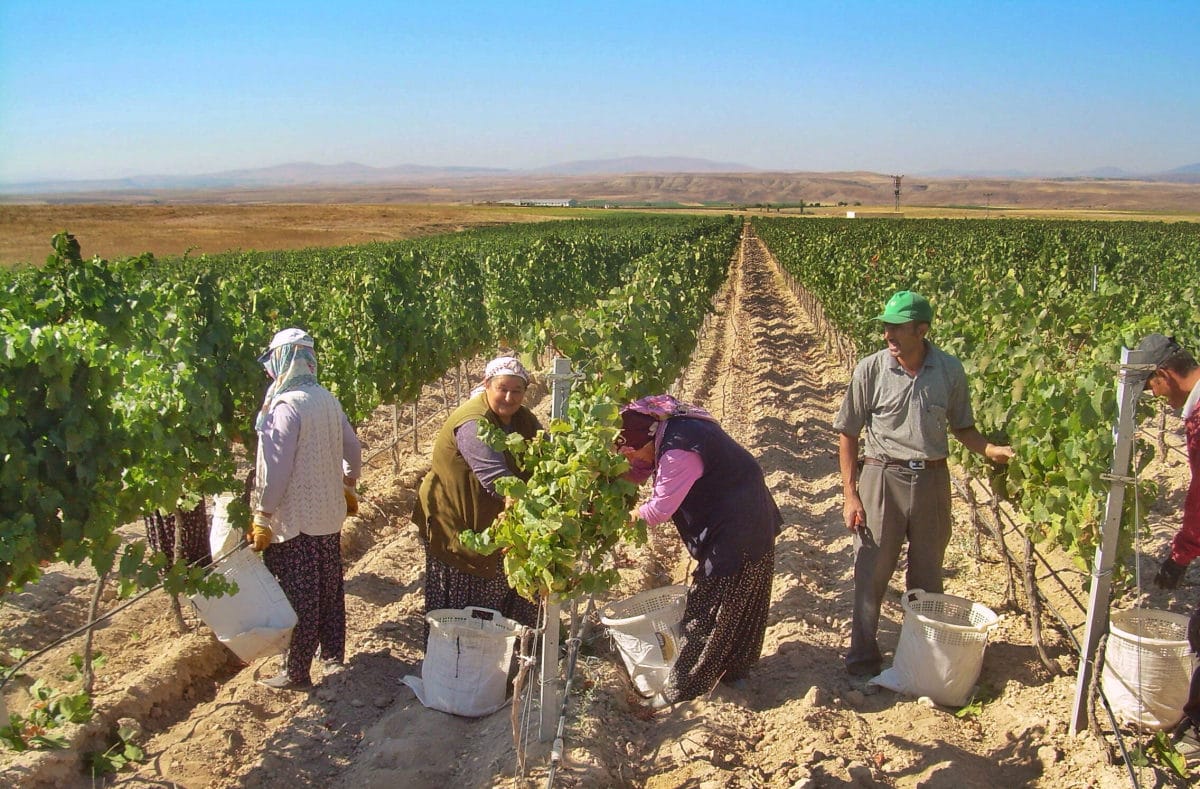 Picking grapes in the vineyards of the Côtes d’Avanos from Kavaklıdere wines in Turkey.

It has a fairly harsh continental climate with some local microclimates and average altitude of 1000m. The renowned Kalecik Karası grape originates from the Ankara region, the capital of Turkey. It was once cultivated by the Armenian community. We also come across the Hasandede grape variety which produces dry wines often cut with the Emir or Narince grape variety. In the volcanic region of Cappadocia, traditional viticulture is practiced, using natural fertilizer dating from medieval times: columbine. The terroir will produce from the Emir grape, mineral wines high in acidity and with aromas of green apple and lemon.

4) The region of eastern and south-eastern Anatolia 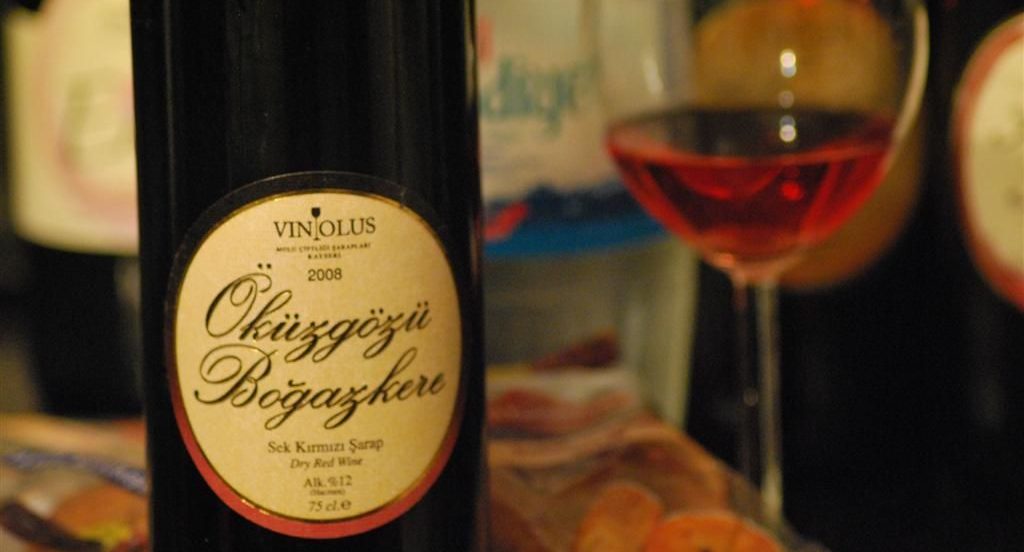 Located not far from Mesopotamia, this region produces the best red wine grapes. The Boğazkere grape variety, strong tannins, is rarely treated as a single varietal but cut with the Öküzgözü. It is particularly developed in the Diyarbakır region. While the Öküzgözü grape, ox eye in English, with notes of black fruit and spices, rather full-bodied and aromatic, flourishes a little further north, in the province of Elazığ. Generally the mixture is composed of 2/3 of Öküzgözü and 1/3 of Boğazkere, it is the preferred wine of the Turks. 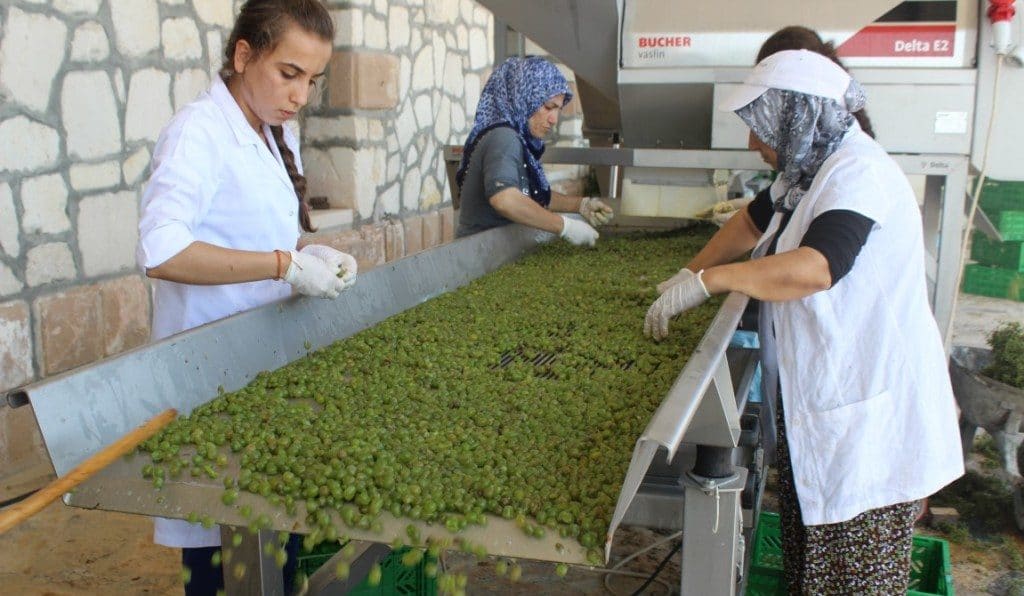 Sorting after a harvest of white grapes intended for the production of Narince white wine.

Very rainy, the Black Sea region produces the best dry and semi-dry white wines in Turkey from the Narince grape variety. It is in the plains and valleys south of the Pontic Range that this grape is found, especially in the region of Tokat which separates the Black Sea from Central Anatolia. The wines made from this grape are suitable for international standards with their lively acidity and an aromatic richness such as citrus (orange, grapefruit and lemon) as well as floral tones.

Our selection of the best Turkish wines 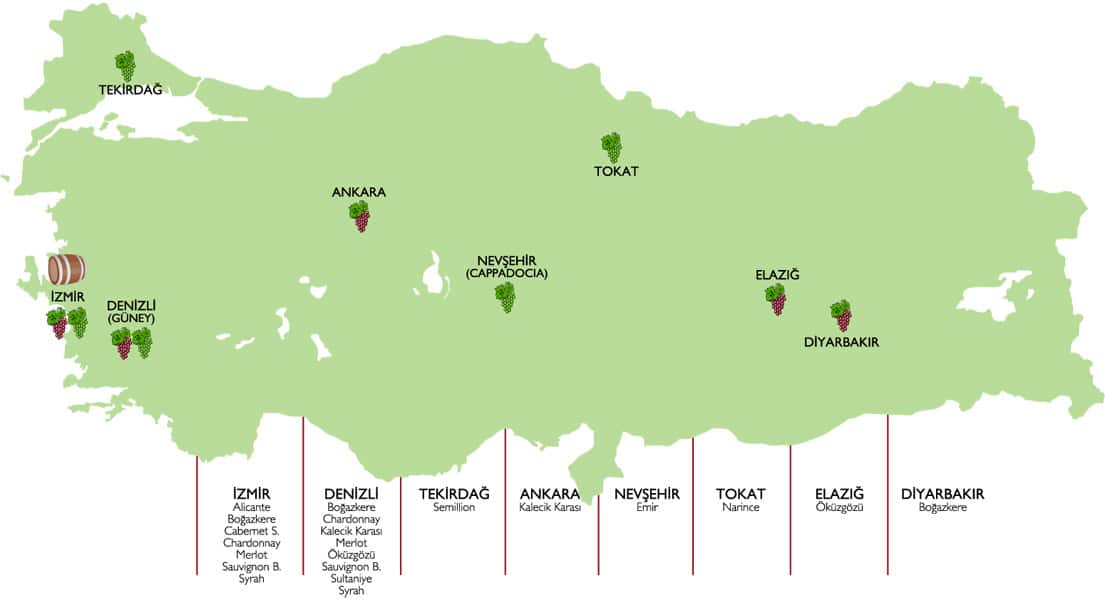 This map will help you distinguish the origin of certain grape varieties selected for you below;

The address book of wine cellars in Istanbul

Here are our best addresses for getting good bottles or participating in a wine tasting session offered by certain wineries that appear in this list: 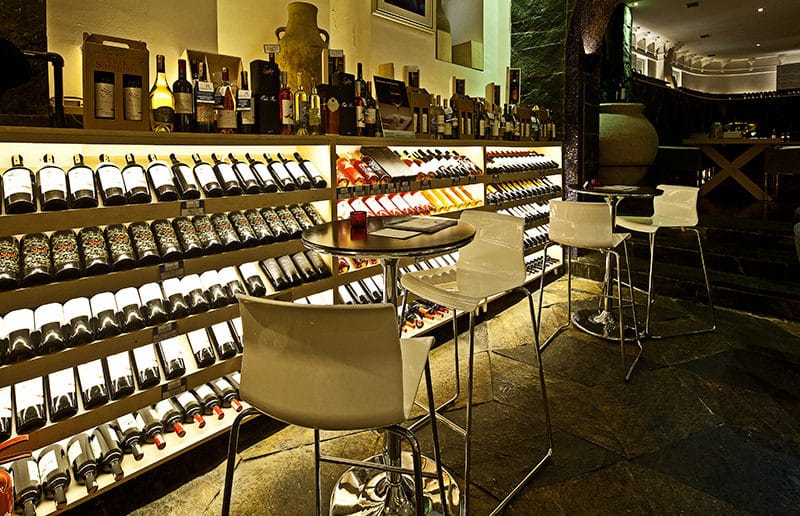 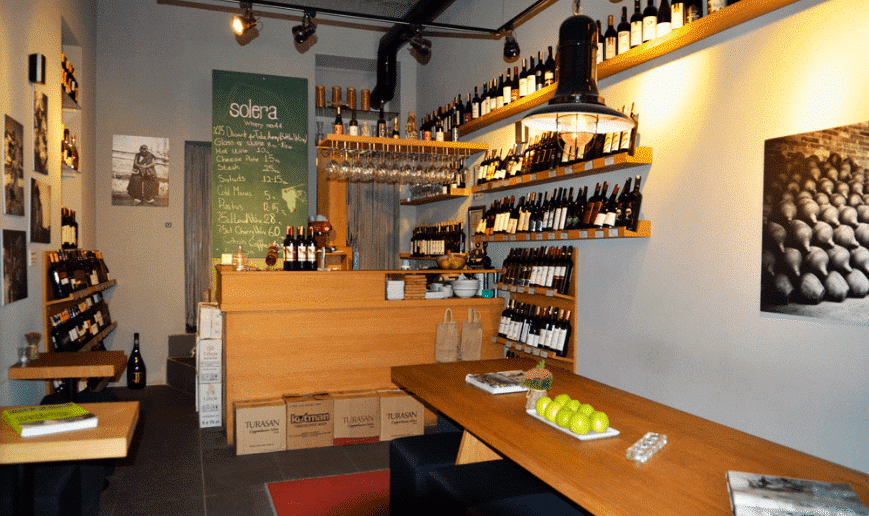 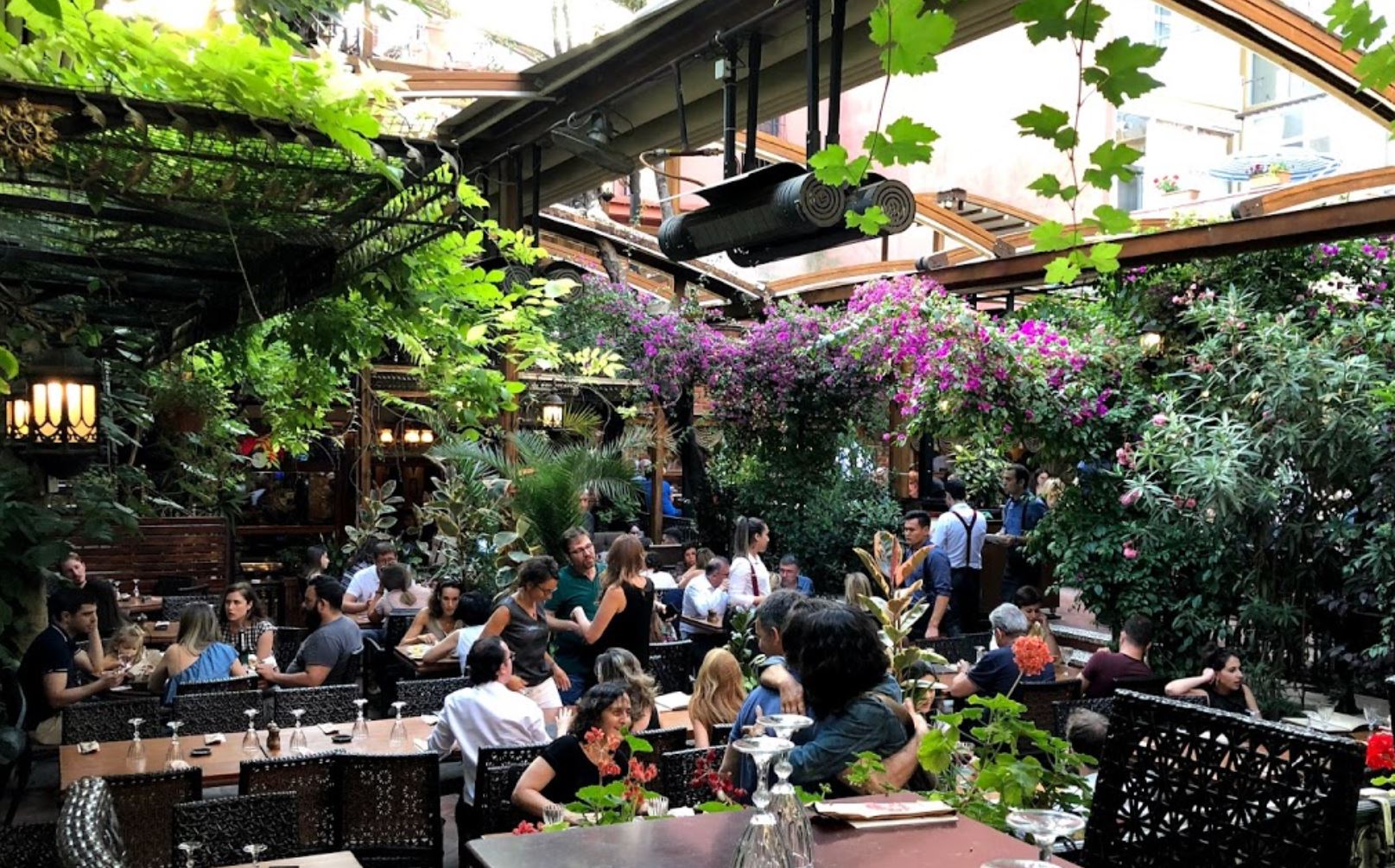