The Princes’ Islands (“Adalar” in Turkish) are an archipelago in the Sea of Marmara, they are a small haven of peace in Istanbul and a perfect place to relax and enjoy nature.

During summer, we recommend you to get there on weekdays rather than weekends because they are invaded by the townspeople and the tourists.

They owe their name to the fact that during the Byzantine period the imperial family and disgraced aristocrats were exiled in the monasteries on the islands. They then became the favorite weekend destination of the Ottoman aristocracy, and even today you will find many Victorian-style villas.

The four main islands of the archipelago are Büyükada, Heybeliada, Burgazada, and Kinaliada. They are accessible by ferry from Beşiktaş, Eminönü, and Kabataş from the European side, and Kadıköy and Bostancı from the Asian side.

Find the schedules of the boats by clicking here. 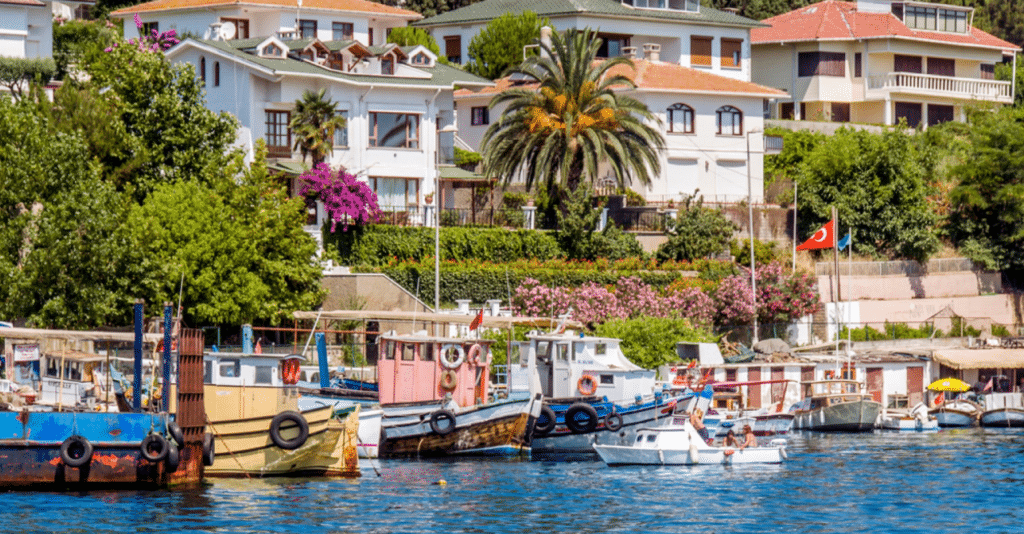 One of the Princes’ Islands: Büyükada.

One of the interesting aspects of the Princes’ Islands is that the archipelago is a real ethnic and cultural mix, each island has a majority religious community. Kınalıada was the holiday resort of Armenian bishops and Armenian from Istanbul, Burgazada was a village of  Greek fishermen, Heybeliada was the island of Turkish and Greek “bourgeoisie” of Constantinople, and finally, the biggest island, Büyükada, was popular among Jews and European from Istanbul, although each community is present on the island. You can still find on all the islands many active synagogues, churches, and mosques.

To discover the archipelago and swim in the hidden coves of the Marmara Sea, we propose a day sailing to the Prince’s Islands and daily yacht trips. 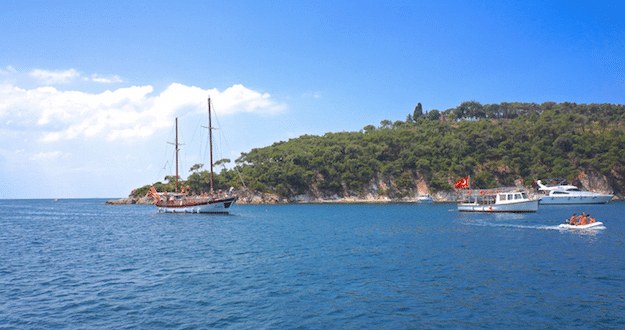 Coves only reachable by boat.

Getting around on islands:

On the islands, motorized vehicles are prohibited. To get around, the islands use carriages (fayton), but this means of locomotion is controversial because of the bad treatment that the horses undergo to satisfy the many tourists visiting. Moreover, more and more Istanbulities are becoming aware of the improvement of the condition of horses on the islands, and generally of the animal cause.  Instead, we suggest that you use the bike so as not to encourage the mistreatment of horses that carry dozens of people every day and throughout the day without being able to stop.

Let’s choose bikes over horse-drawn carriages for the well-being of our horses.

The price of the bike rental is on average between 25 and 50 TL for the day depending on the days of week or weekend, it is possible to rent it by the hour. You’ll have to leave a piece of ID as a deposit. Bicycle rental companies usually distribute maps of the island for free, don’t forget to ask for one.

Getting around between the islands: 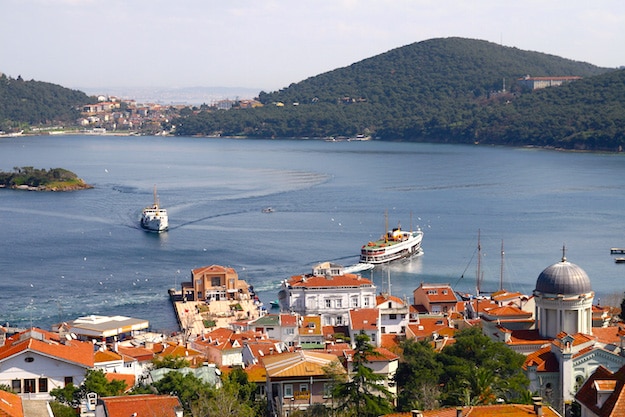 Ferries between the islands.

You can move around by boat (vapur) for free between the islands, the ferries are stopping in each main island, so you just have to get on board.

Büyükada offers a wide range of activities for visitors. The famous Çankaya Street is lined with wooden houses, and one of them was the residence of the famous Russian politician: Léon Trotsky. Another monument not to be missed is the Greek Orthodox Monastery Aya Yorgi (Saint George). This is the main attraction of the island, it is located atop of the highest hill of Büyükada, and offers stunning views of the archipelago and Istanbul. The island has two hills, the first one and nearest from the village is Hristo (Jesus in Greek), you will find at its top a massive wooden structure, believed to be the largest in Europe. This structure was originally designed to be a hotel/casino but the sultan refused it, and the building became a Greek orphanage. When the Greek population in Turkey declined in the 20th century, the orphanage closed its doors and is currently abandoned.

Büyükada is full of little treasures, at only an hour by boat from the city, you will find yourself in a beautiful and natural environment completely different from the chaos the tentacular metropolis of Istanbul. The other islands are also worth a look, especially if you travel to the archipelago on weekends, they are quieter and less touristic than Büyükada.

A beautiful wooden house in Büyükada.

Heybeliada is the second largest island and probably the most natural, in addition to its lush vegetation you will find beautiful wooden houses, a Greek Orthodox monastery on top of the island and the Halki Institute of Orthodox theology, a high education institution for the theological formation of the Orthodox clergy. 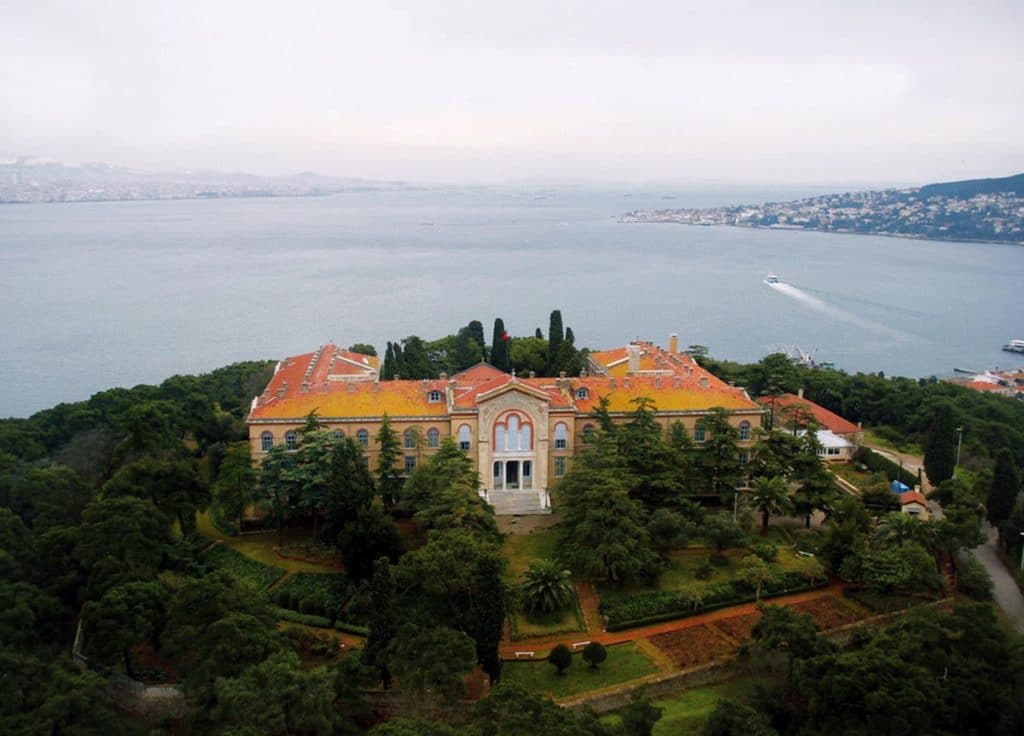 Burgaz is the third-largest island of the archipelago, it is a quiet island that was populated by Greek citizens of the Ottoman Empire. The island is called in Turkish Burgaz and Antigoni in Greek, the name comes from Demetrius I, one of the successors of Alexander the Great who built a fortress named after his father Antigonus (Burgaz means “fortress”). 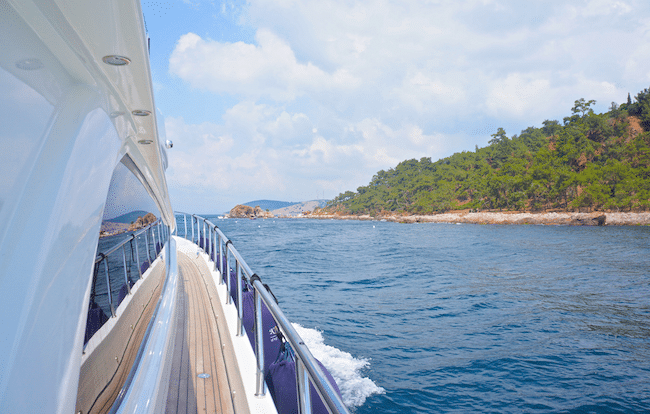 Burgaz island from our boat.

Kınalıada is the smallest of the four main islands of the archipelago and the least forested. Kınaliada means the island (ada) and henna (kına), in reference to the color of waters that bathes the island.