Coming to Istanbul without visiting the neighborhoods alongside the Bosphorus would be a big loss. Most of the tourists only do a boat trip on the Strait, and unfortunately, they miss the magic of these neighborhoods. It is a real chance for the locals that these areas are not well known by tourists yet because you can still find a real authentic mood.

The Bosphorus is a 42 km long strait connecting the Sea of Marmara (in the South) and the Black Sea (in the North). It divides Istanbul into two parts, but also Europe and Asia. More than 50 boats are crossing the Bosphorus each year, in addition to the countless ferries going back and forth between both sides. More than a million people are estimated to go from one side to the other every day. Three bridges span it and a metro tunnel goes under. 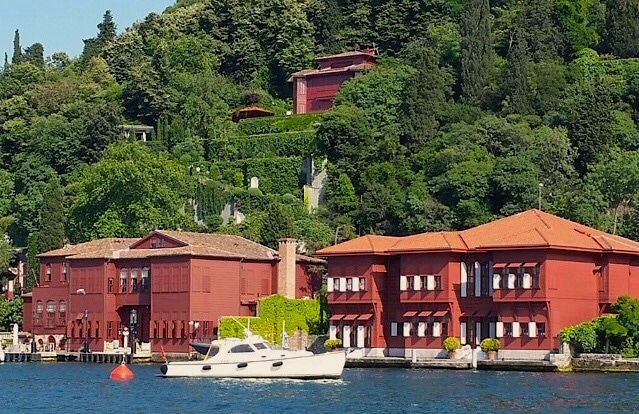 A yalı (house by the Bosphorus) in Kandili.

Most of the tourist guides stop at Ortaköy, located just before the first bridge, forgetting about the other neighborhoods in which locals – especially wealthy people – live. The Strait is a sort of green oasis in the urban jungle, and it is a real heaven of peace in the city. You should not miss breakfast, a dinner, a, or a party by the Bosphorus!

Before telling you about the main neighborhoods that you can find on the European side of the Bosphorus, we advise you to visit the Dolmabahçe Palace. It was built in the middle of the 19th century because the Sultan thought that the Topkapi Palace, located in the old city, was too medieval and rustic compared to the European palaces of the time. That is why he decided to build a new palace on the Bosphorus shores. The Strait’s shores then became the administrative center of the Ottoman Empire, from 1853 to 1922, and the small villages around started urbanizing. After this, the palace became the primary residence of Atatürk (Mustafa Kemal, founding father of the Turkish Republic). He died there on November 10th, 1938 at 9:05 am, that is why many of the clocks in the palace are set to 9:05. The palace is 45 000 m², has 285 rooms, 6 hammams, and 68 toilets! It is the biggest palace in Istanbul. The entrance to the Palace cost 40 TL and to the Haram 25 TL. The visit is necessarily accompanied by an official guide and will last around 2 hours. The palace is open from 9 am to 6 pm and is closed on Mondays.

After this stop in one of the most beautiful palaces in Turkey, here is a small overview of the main Bosphorus neighborhoods.

Going up on the large avenue next to the palace, you will get to Besiktas. Even if it does not have direct access to the sea, it is a very nice student area, vibrant and full of people day and night. Formerly the residence of people working in the DOlmabahçe palace, it is today the stronghold of the Besiktas football club supporters? If you want to discover this vibrant neighborhood, full of colors and tastes, we organize tours in the area. For more information: Culinary and cultural walk on two continents. 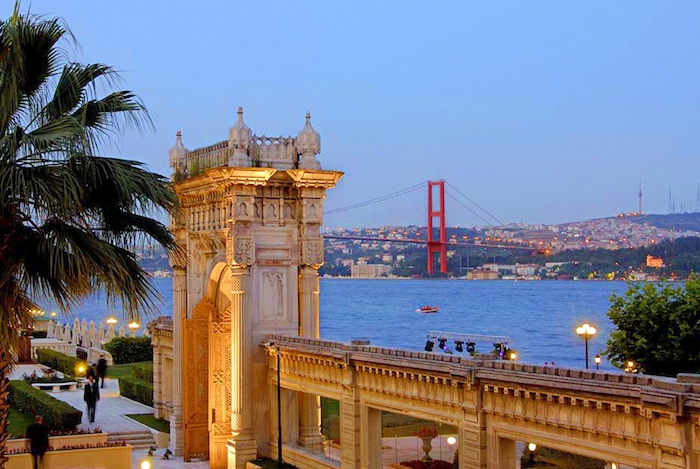 View from the Çirağan Kempinski between Beşiktaş and Ortaköy.

After the Beşiktaş district, going up along the sea, you will see other beautiful palaces which are now hotels (Kempinski et Four Seasons), before getting to Ortaköy. It is probably one of the only neighborhoods in the world which has a mosque, a synagogue, and a church on less than 1km2. It is also the area where you can find the main nightclubs over the Bosphorus (summer’s specials in Istanbul). Even if it becomes more and more touristic, the small port is very nice. Do not miss the Ortaköy’s culinary specialty, the kumpir, which is a hot potato filled with almost whatever you want. On the port, there are also nice restaurants by the sea, such as the House Cafe (brasserie) and Banyan (Asian fusion). If you want to have a drink, we like the Hobo bar, which has a great view.

If you want to take a boat tour on the Bosphorus (which lasts around one hour), you can take the boat from Ortakoy rather than from the old city: the boat will be less crowded.

After this tour on the Bosphorus, you can go to the Kuruçesme neighborhood to have a drink by the Bosphorus on the beautiful terrace of Aşşk Kahve (their brunch is also amazing).

In this neighborhood, you will find beautiful houses and wooden Ottoman buildings. This area is still a very good example of the cohabitation between the different communities in the empire, with its mosque, churches, and synagogues. The small streets are charming, and their quietness gives the impression to be in a small village, far from the torpor of the city. Nowadays, the area is very popular for its fish restaurants where people in Istanbul meet to spend a nice evening with their friends. The restaurants that we prefer in this area are Eftalya, Atlas Balık, and Sur Balık. After dinner, you can go to Any, a trendy bar to have a good cocktail, also our favorite n this area, Alexandra Cocktail Bar. 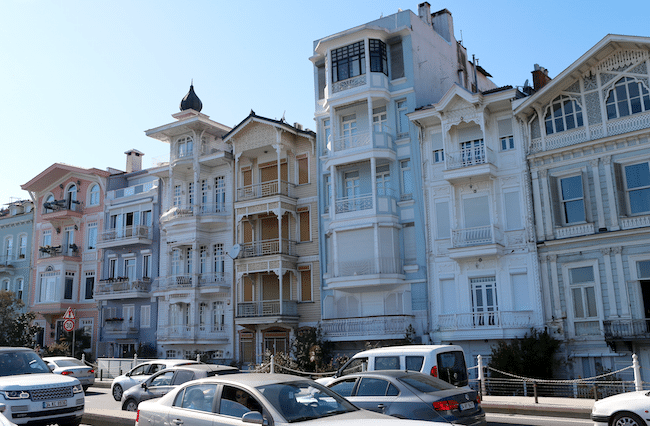 One of the trendiest neighborhoods of Istanbul. There you can find many nice bars and restaurants by the sea, and during the sunny weekends, the area fills with Turkish celebrities and beautiful cars. Bebek Kahve and Mangerie are very nice places to have breakfast. The district’s specialty is fruits and chocolate filled waffles and mini ice cream cones. To have a drink, go to  Lucca, it is a very famous bar in the area where wealthy people in Istanbul meet, and the food is delicious. You can also find terraces by the sea, such Chilai ou du Bebek hôtel, which are perfect for a drink at sunset. The Taps offers a large choice of local and artisanal beers. Do not miss Bebek, it is a local neighborhood, far from the Orientalist clichés of Sultanahmet, and its way of life makes it one of the nicest places in Istanbul.

After Bebek, under the second bridge, you can find the Rumeli Hisari fortress. It is the oldest Ottoman monuments in Istanbul. It was built by the sultan Mehmet II the Conqueror (1432-1481) between 1451 and 1452 before the conquest of Constantinople. It is also a very nice place to have breakfast (see our article about Turkish breakfasts in Istanbul).

The fortress of Rumeli Hisari.

A neighborhood worth seeing! It is a very charming area which hosts the Sakip Sabanci Museum, owned by one of the richest families in Turkey. It hosts Pablo Picasso’s, Rodin’s, Anish Kapoor’s and Juan Miro’s collections, and even the Joconde. We often talk about this museum in our article about concerts et expos du moment. Next to this museum, you can find the Emirgan parc (Emirgan Parkı), covering a land area of 5 km², it is one of the biggest and the most beautiful parks in Istanbul. It is a very good place to breathe clean air. Each year during spring, a sumptuous tulip festival is organized there. If you want to have a good brunch, you can go to Sütiş, and if you want to have a drink you can go to La Boom. There is also a small cabaret hidden in the pizza Emirgan called Gizli Kalsın. If you think that you can go in you can try to, but we cannot guarantee you that you will.

Once you left Emirgan and the Istinye marina, you enter into the quiet and luxurious universe of the Yeniköy and Tarabya neighborhoods. Here, the houses by the water and bought and sold at millions of dollars. There are the most expansive areas on the Istanbul Monopoly game, and in 2015 a house was sold for 100 million dollars there. From the street, you will not see much, and the touristic boats do not go to Yenikoy. The best way to admire those splendid houses is to rent a boat: Private cruise on the Bosphorus. 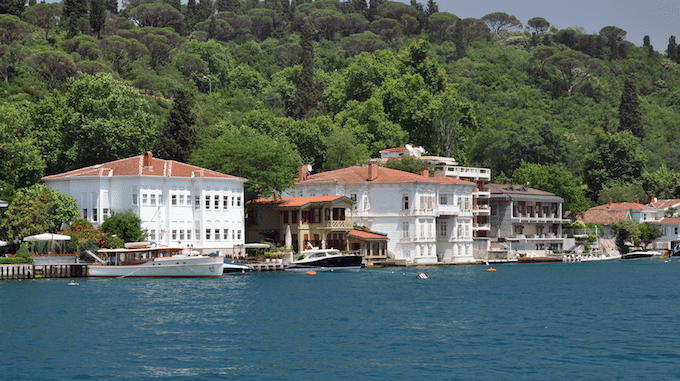