The hammams (Turkish Baths) of Istanbul

Once in Istanbul you can not miss a hammam session in one of the many historical Turkish baths of the city, here is some history and some addresses:

Origins of the hammam: 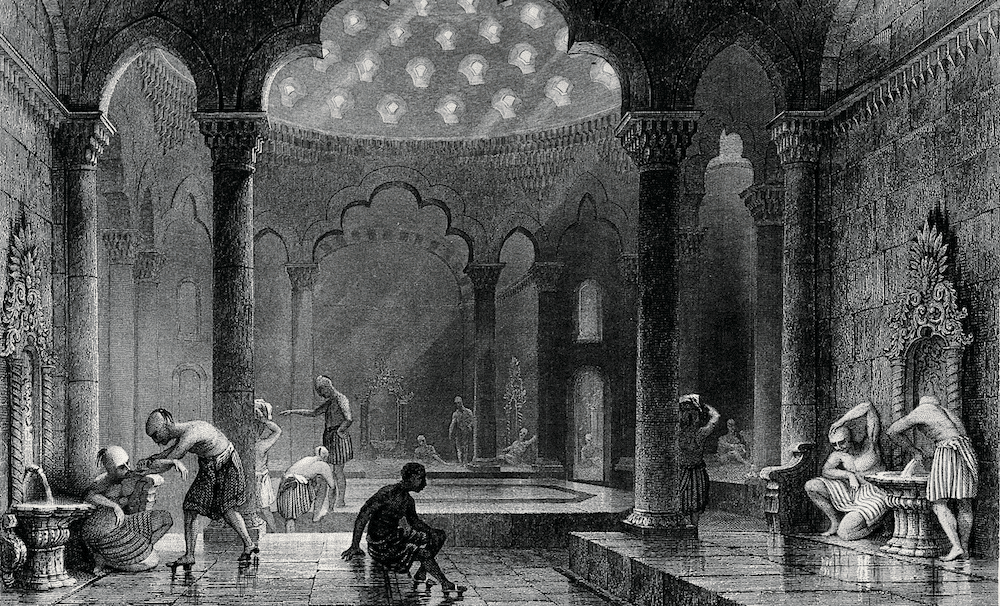 The hammam is a place of purification of body and mind and cleanliness. Istanbul has about sixty baths, it would be a shame to miss this experience!

Traditionally, the hammam is divided into three rooms. You will find a first room at room temperature which acts as a cloakroom. In the second room, the temperature is a little higher but remains warm (37 ° C / 38 ° C), the last room is the warmest room (50 ° C) where we sit on a bench in marble and where you let yourself sweat.

Benefits of the hammam:

The hammam is a meeting place that allows you to evacuate stress and daily toxins and come out clean and calm.

The steam helps cleanse the skin deeply because the pores expand, and it releases and eliminates toxins and bacteria.

The hammam is generally better supported than the sauna thanks to its smaller temperature difference. However, it is not recommended for pregnant women 6 months and older, people who suffer from respiratory problems or heart disease. If you are sick or do not feel well, we advise you to seek the advice of your doctor.

To make the most of your hammam session, we do not recommend that you come after a large meal (wait at least 3 hours) or after a large intake of alcohol.

Course of the hammam session

When the hammam is not mixed, as soon as you arrive, make sure you enter through the right door (woman = kadın) (man = erkek).

At the reception after choosing your formula, you will have access to the locker room. Keep only the swimsuit, roll up in the towel you were given and head to the next room. (For women, you can only keep it down if you feel comfortable.) For 15-20 minutes sweat and rinse your body and hair using the copper bowls. The hammam staff will then pick you up for the scrub. Using a glove (kese) they will rub you vigorously to remove dead skin. After having put on your skin, you will discover the bubble bath (köpük). It is made with a large pocket of cloth soaked in soapy water then inflated with air and finally passed over you.

After your session, they will take you to a cool room where they generally offer you tea (çay). It is nice and advised to drink tea after a hammam session.

Here is our selection of the best hammams in Istanbul: 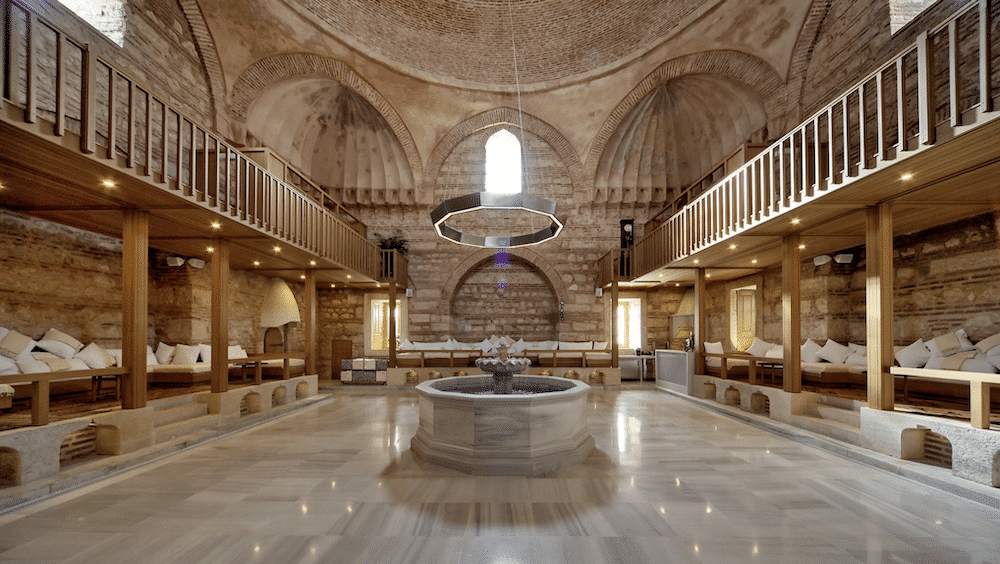 Ordered to the great architect Sinan by the famous Ottoman admiral Kılıç Ali Paşa as part of the mosque and the school complex, the Kılıç Ali Paşa Hamamı was built between 1578 and 1583 to serve the Levents, the soldiers of the Ottoman navy. Famous for its architectural lines and its majestic dome, this hammam is one of the symbolic buildings in Tophane, the district of the old port of Istanbul. The Kılıç Ali Paşa Hamamı re-opened its doors in 2016 after seven long years of meticulous and intensive restoration and offers an unforgettable experience to its visitors.

The entrance ticket gives you free access to a hammam session and includes the loan of a bath towel, peştemal, a pair of slippers, a sponge for exfoliation, and an olive oil soap.

Address: Kemankeş Karamustafa Paşa Mahallesi (Hamam Sk. No 1, Istanbul). You will find the prices of the hammam here!

If they are no longer as frequented by the Stambouliotes as they once were, the Turkish baths remain for travelers a strong image and a new and unique experience.The Hürrem Sultan Hamamı was built at the request of the wife of the Sultan Suleiman the Magnificent in the 16th century, by the Ottoman architect Sinan,  and between the Blue Mosque, the Hagia Sophia and the Temple of Zeus. It is a true architectural innovation, it is one of the only Turkish baths to have designed identical men and women sections, on the same axis, mirroring each other.

The entrance ticket gives you free access to a hammam session and includes the loan of a bath towel, peştemal, a pair of slippers, and a gift box containing a sponge for exfoliation, a hand olive oil soap, and a cream lotion for hair and body.

Hours: the hammam is open every day from 8 a.m. to 10 p.m. The hammam is not mixed. The hours are the same for men and women but in different spaces.

Address: Cankurtaran Mahallesi (Ayasofya Meydani No 2, Istanbul). You will find the prices of the hammam here! 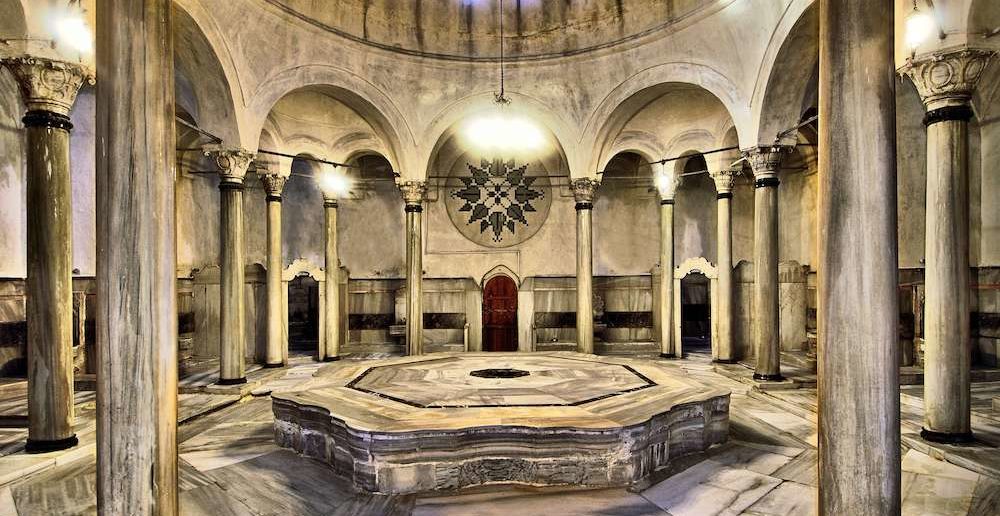 Cağaloğlu Hamamı is the last large hammam built during the Ottoman era. It was built during the reign of Mahmut I in 1741 by Abdullah Ağa. Cağaloğlu hamamı has Baroque features and other building stylistic novelties that were not common in classic Ottoman architecture.

The entrance ticket gives you free access to a hammam session and includes the loan of a bath towel, peştemal, a pair of slippers, as well as a gift box containing a sponge for exfoliation, a hand soap. olive oil, and a cream lotion for hair and body.

The Süleymaniye hammam was built in 1557 by architect Mimar Sinan for Suleiman the Magnificent. The Suleymaniye hammam is one of the most beautiful hammams in Istanbul with its domes and geometrically aligned chimneys. Eight marble columns surround the central massage stone. The bath, which was closed in 1924, was renovated and returned to service in 2004.

The entrance ticket gives you free access to a hammam session and includes the loan of a bath towel, peştemal, a pair of slippers, a sponge for exfoliation, and an olive oil soap.

Address: Fatih Mahallesi (Mimar Sinan Cad. No 20, İstanbul). You will find the prices of the hammam here

The Aga hammam was built in 1454 for Sultan Mehmet II. This hammam was used for the private use of the Sultan and his sons. Sultan Mehmet II is known worldwide for his conquest of Constantinople in 1453. The hammam of Aga is the first hammam of the Ottoman Empire in Istanbul. It is a mainly popular hammam with more affordable prices in a traditional atmosphere.

The entrance ticket gives you free access to a hammam session and includes the loan of a bath towel, peştemal, a pair of slippers, a sponge for exfoliation, a soap and a shampoo.

This selection is just a small selection among the many other hammams in the city, do not hesitate to share your experience in comment or by email!