The spices most used in Turkish cuisine

Turkish cuisine is very spicy, and even if most of them are not cultivated in Turkey, there is a real market dedicated to them. Turkish people value a lot the quality of the products used in their dishes. When people come to Istanbul for the first time, they could easily think that locals buy the spices they use in the Spice Bazaar (called Mısır çarşısı or Egyptian Bazaar in English). Actually, very few of the spices sold in the Grand Bazaar (saffron, cardamom, aniseed, and other exotic spices) are used in modern Turkish cuisine. They were used by the Sultan’s Ottoman chefs that were only using the best ones: black pepper from South-Eastern Asia, musk from Siberia and Himalaya, saffron from the Middle-East, etc.

THE SIGNATURE SPICES OF TURKISH CUISINE

Nowadays, if you want to find the best products, you should better pay attention to the ones that are used by Turkish chefs: the local products. Here is a short overview of the best Turkish spices:

You will find some at every restaurant table. Their color goes from dark red to orange, and they are very spicy, even if they are less spicy than the ones used in South-American or Asian cuisine. Some of the pepper flakes are only bringing flavor, they are adjusted to each one’s taste. It is a very good product to bring back from Turkey because it brings texture and taste to your dishes.

It is one of the most used seasonings in Turkish cuisine. It brings freshness and acidity to soups and salads.

Cumin is generously used in the koftes (meatballs), it gives a spicy and buttery taste to the meat. It is also widely used in vegetable dishes and in the hummus in South-Eastern Turkey.

Sumac looks like pepper powder but it is, incumin reality, a purple dried powdered wild berry. Like most of the berries, it gives a sweet and sour taste to food. You can find sumac on the onions served in the kebab restaurants and in many pepper or tomato-based dishes.

Most of the Turkish spices come from South-Eastern Turkey, such as peppers from Adana, Maras, and Antep. The Urfa pepper is dried under the sun, and it is also fermented, which gives it a darker color and a chocolate and grapefruit smell. It does not have red pepper’s intensity, but it can be used to give taste to salads, soups, or koftes.

Black cumin has a spicy and peppery taste. Known for its antioxidant qualities, it helps strengthen the immune system when it is consumed regularly and in small quantities. In Turkish cuisine, it is usually sprinkled over traditional bread, or to go with some Turkish cheese. It gives a nice lemon and spicy taste. Nigella oil is very appreciated in ayurvedic medicine because it helps to cure some allergies.

OUR TIPS FOR BUYING YOUR SPICES 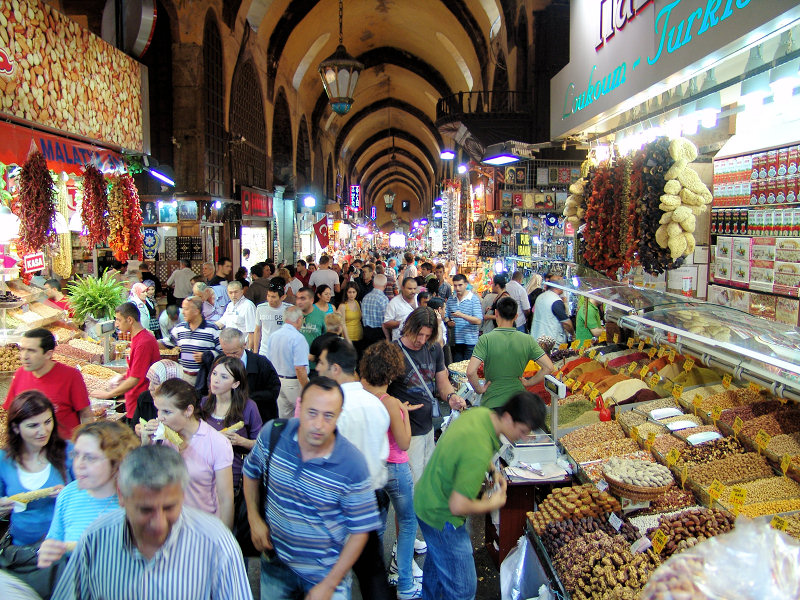 The Egyptian Bazaar in Istanbul.

You can buy spices in Istanbul in the Egyptian Bazaar, but it can be a bit tiring because the sellers usually arrest clients and visitors.

Here are some tips before going for the route of spices:

Of course, the Egyptian Bazaar is not the only place where you can find good spices in Istanbul. Many shops specialized in spices and other local products exist everywhere in the city, but it is mostly in local markets that you will find excellent products.