From your first moments in Turkey, you will certainly notice these blue pendants, eye-shaped, hanging everywhere, and sold in every souvenir shop. 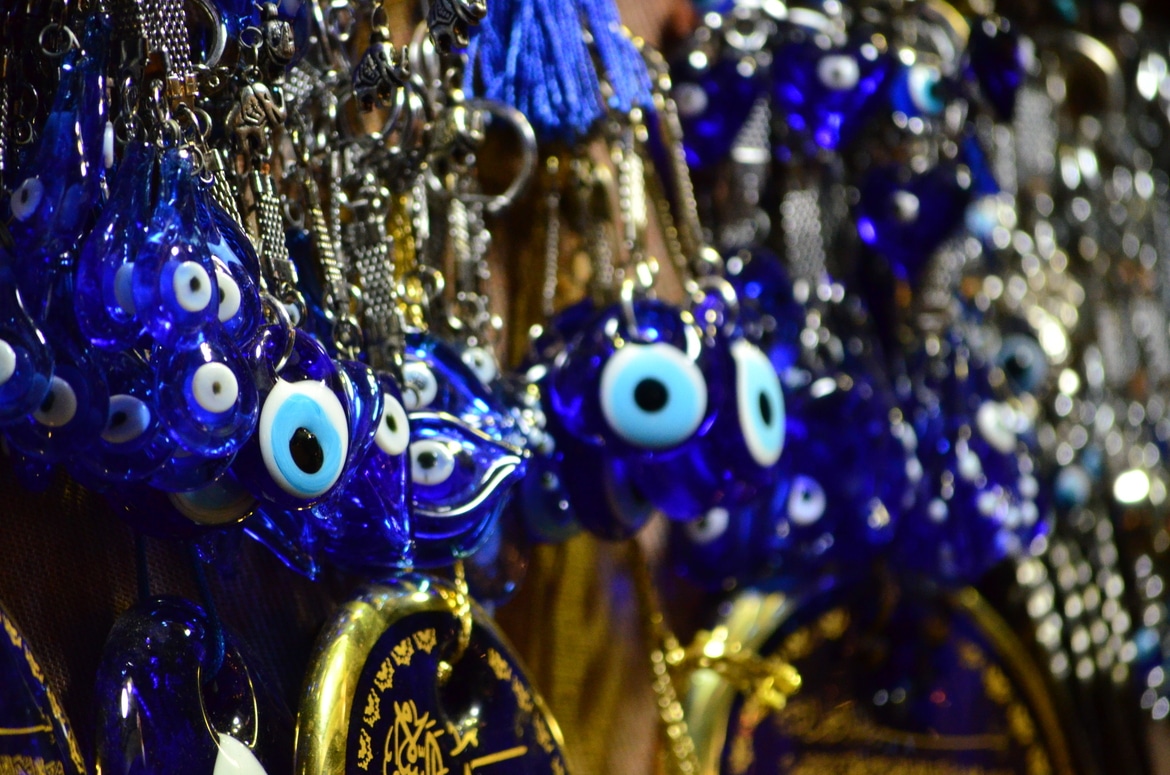 This object, handcrafted from glass paste, is called the “Nazar Boncuk”. The word “Nazar” comes from the Arabic language, and it means “look”; “Boncuk” means “pearl”, so literally “pearl of the look”. In English, it is unfairly called “the evil eye”, which makes it terrifying when it should be the opposite.

The Nazar Boncuk used as a logo by Fly Air.

The Nazar Boncuk is an ancient talisman that is present throughout the Middle East. It can be seen in Armenia, Iran, and Greece, but it is in Turkey that it is most widespread. The Nazar Boncuk is everywhere, hanging on doors, in offices, hanging on a pendant, on mirrors for taxis or buses, embedded in the walls of buildings or on the subway. It’s also a very popular gift, offered to bring good fortune. And before you even realize it, you will be “contaminated” by this tradition too.

What does it symbolize?

The Nazar Boncuk symbolizes the jealous and envious look of others, which, according to the popular belief, would have the power to cause various misfortunes to a person or his property. Turkish people believe that this amulet protects its holder from the bad energies by absorbing them. 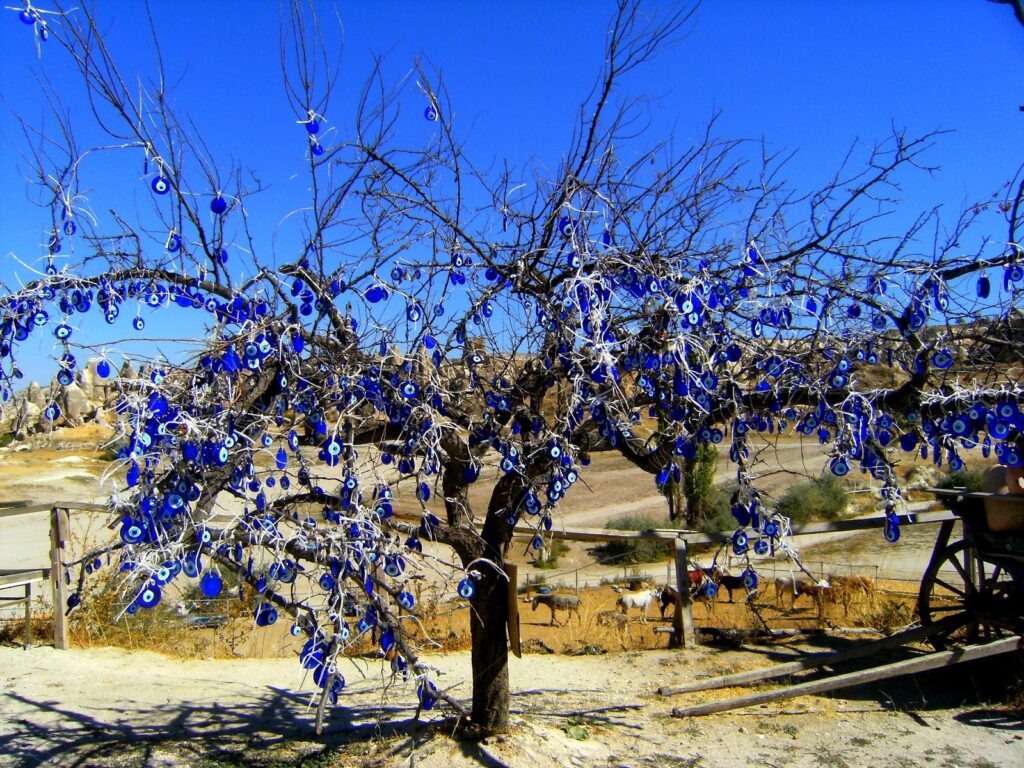 Where does this superstition come from?

The belief in the evil eye is also widespread in Judeo-Christian culture, it is quoted in the Old Testament but also in the Koran.

Almost every civilization from, India to Europe, has attempted to express this superstition using amulets.

But this symbol could be way older than this. Already in ancient Egypt, the eye of Horus was painted on tombs and mummies to bring good luck to the souls of the dead on their journey to the afterlife. The Egyptians were obsessed with this eye, they even put their makeup on the eyes with Kohl to prevent an evil spirit from taking possession of their body. The ancient Greeks also painted it on the bow of their ships to protect their boats from the wrath of Poseidon.

The Turks were shamanist nomads who traveled through Central Asia before arriving in what is now called Anatolia. This may be the reason why the Nazar Boncuk is the synthesis made by the Turks of the ancestral traditions of the countries they crossed to represent the amulet protecting them from the evil eye. The blue color probably comes from the influence of the Byzantines in which blue, the color of heaven and water, was sacred. It symbolized the infinite, the divine, the spiritual, and also evoked peace, calm, voluptuousness. But it is also the color that distinguished the Sebastocrates, or Byzantine Emperor, from other citizens. It is also encrusted in the Ottoman mores (Iznik ceramics, Blue Mosque, etc.).

Even today, in the Aegean region, blue is supposed to bring good fortune; this is why the doors of the houses and the roofs of the churches in the Greek islands are blue.

Another amulet that is often associated with it is the Khamsa, which is very common in North Africa and the Middle East. It’s an open hand with five fingers and an eye in the middle. This ancient symbol goes back to antiquity and the Punic religion where it was associated with the goddess Tanit. You may know it like the hand of Fatima. This symbol, among Muslims, gives tribute to the daughter of the prophet Mohammed, Fatima-Zahra. The 5 fingers held out of the hand represent the 5 pillars of Islam.

This hand is not a religious symbol, however, it is supposed to protect those who wear it against bad luck, a bit like the Nazar Boncuk. Other peoples in the region also use it; the Jews call it the hand of Myriam, and the Levantine the hand of Mary.

In Turkish, when something goes wrong for someone, they say that the “Nazar” touched him: “Nazar değdi”.

If a Nazar Boncuk breaks or cracks, it means that the talisman has performed its duties and absorbed a bad eye, so it must be replaced immediately.

It is said that for Nazar Boncuk to be effective, it must be bought by a person with pure intentions, not by oneself. This is a gift that Turkish grandmothers often give to their grandchildren, that merchants will slip you into the bag or pocket and it’s a nice gift to bring back from Turkey.