Turkey is a destination with all kinds of landscapes for everyone’s pleasure. This country is located on two continents, mainly in Asia and 3% in Europe with a population of over 83 million inhabitants in 2020. It has borders with Greece, Bulgaria, Georgia, Armenia, Azerbaijan, Iran, Iraq, and Syria.

The Republic of Turkey was founded in 1923 by Mustafa Kemal Atatürk. This young country offers a rich history thanks to the ancient Greek, Persian, Roman, Byzantine, and Ottoman empires which allows you to travel through time through its land steeped in history. 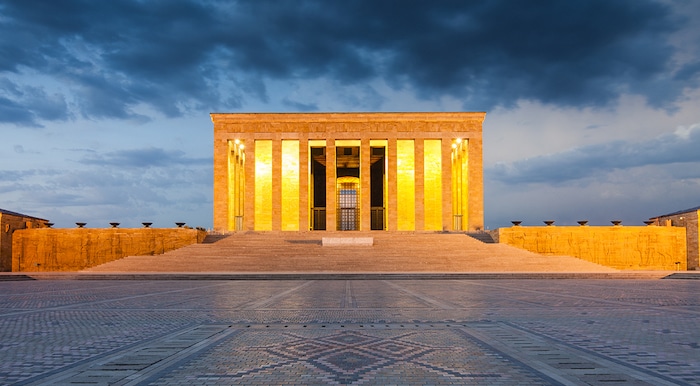 The tomb of Atatürk in Ankara, the Anıtkabir.

The capital of Turkey has been Ankara since 1923. It is the second-largest city after Istanbul. The official language is Turkish, an Altaic language that has been written in the Latin alphabet since 1928 thanks to the reform of the alphabet. Other languages are also spoken by minorities such as Kurdish, Azeri, or Arabic. English is rather spoken in the big tourist cities by the tradesmen.

Turkey is in the UTC + 3-time zone, and since 2016 Turkey no longer uses winter time. Compared to Europe there is, therefore, a time difference of two hours more in winter and one hour more in summer.

For tourist stays of less than 3 months, French, Swiss, Belgian, Tunisian, and Moroccan nationals do not need a visa. A valid passport is sufficient. For Canadian and Algerian nationals, a visa is required. The visa is made on www.evisa.gov.tr 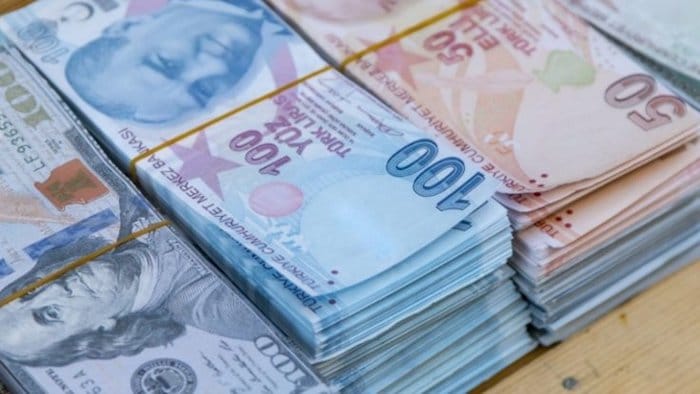 The Turkish Lira, the national currency.

The currency is the Turkish Lira (TL: Türk Lirası). Cash is easily changed at exchange offices and some banks. The rates are similar and cheaper than at the airport or hotel. It is also possible to withdraw money through numerous ATMs and pay by card in many shops and restaurants. Some banks have partnerships that can withdraw euros at no cost like BNP with the Turkish bank TEB. In 2020 the rate is not stable and generally fluctuates between 6.5 and 7.5 for 1 Euro.

Store hours in Turkey are generally 9 am to 8 pm and most stores are also open on Sundays. The shopping centers close at 10 pm. Turkish grocery stores called “bakkal” close around midnight and some are open 24 hours a day. Grocery stores that sell alcohol have the brand name “Tekel”. The sale of alcohol is normally prohibited in grocery stores after 10 pm, but rare are those that apply the law. The cafes and restaurants are open until around midnight but it is always possible to find a place to eat or drink at any time. The bars are open until 2 am weekdays and 4 am on weekends, you will also find many nightclubs and cabarets open all night across the country.

Turkey is a secular country, Islam is the majority religion but it is not compulsory. The main Islam practiced is Hanafi and Shafei Sunnism in the Kurdish majority regions. Banned under Atatürk, Turkey is also the land of Sufism. Also note that 20% of Turks are of the Alevi rite, a Muslim branch who does not believe in worship, they do not go to the mosque, women are equal to men, and they do not practice Ramadan and can drink alcohol.

In big cities and the Aegean coast atheism and deism are on the increase.

You will also find Christian (especially Orthodox) and Jewish minorities across the country. Regardless of their religions, Turks are very attached to secularism. 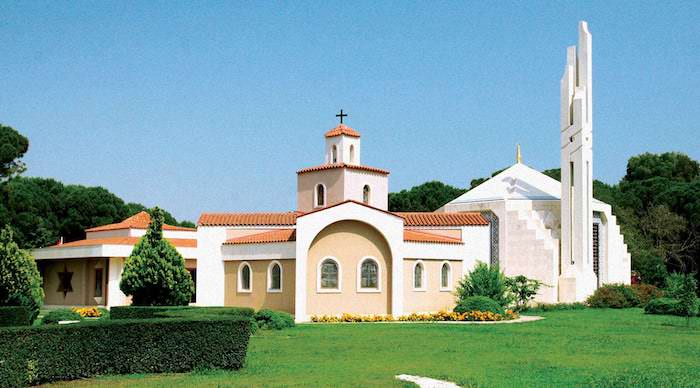 Built-in 2004, the Garden of Religions in Belek houses a synagogue, a mosque and a church where followers of the three religions can gather and exchange.

No special attire required, you can dress as you wish in Turkey. There are no dress restrictions, women can dress as they wish; just note that a scarf and pants are to be provided for the visit of mosques or other places of worship, they lend free scarves in front of the mosques for those who have forgotten. Here is also one of our articles: “Being a woman in Turkey“, which we wrote to take down the clichés we unfortunately so often hear.

Turkey is best known for its white sand or small pebble beaches and its turquoise water by the Aegean and Mediterranean seas. The coastline has a total length of 7200 kilometers also surrounded by the Marmara Sea and the Black Sea.

In the center of Turkey is a large semi-arid plateau surrounded by mountains over 3,000 meters above sea level. This is where Cappadocia and its magnificent lunar landscapes are found.

The pontic chain which runs along the Black Sea for 500 km offers a surprising alpine landscape. The mountains are mainly covered with dense coniferous forests. It’s also where over 70% of the world’s hazelnuts and Turkey’s iconic black tea are produced. 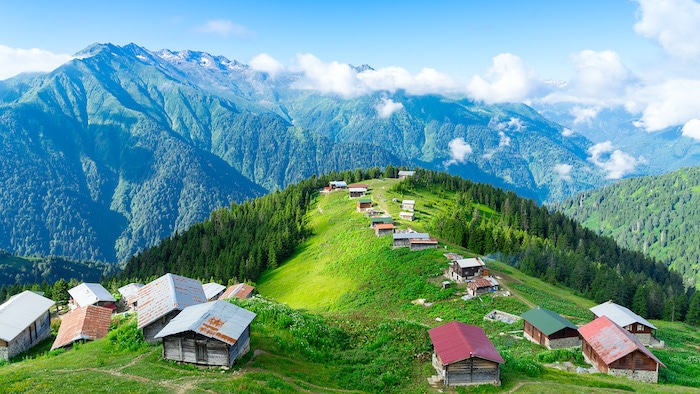 Mountainous landscapes from the Black Sea to Trabzon.

The Taurus Mountains are located in south-eastern Anatolia for 600 km. The mountain chain separates the Anatolian plateau from the south of the coast. The numerous cliffs and coves along the Mediterranean coast allow you to relax and enjoy the calm.

The highest mountain in Turkey, Mount Ararat rises to 5,165 m. It is reputed to be the dormant volcano with eternal snow.

Mount Uludağ located 30 km from the city of Bursa is a renowned destination for skiing in winter, camping, and trekking in summer.

The country is crossed by many rivers and has several lakes. Lake Van is the largest with an area of 3755 km². It is brackish with a mixture of saltwater and freshwater that comes from snow melts. The 1 to 2 m deep Tuz Gölü is also important since ¾ of the Turkish salt comes from there. It is also an ecological reserve because it is one of the migratory stages of the flamingos. 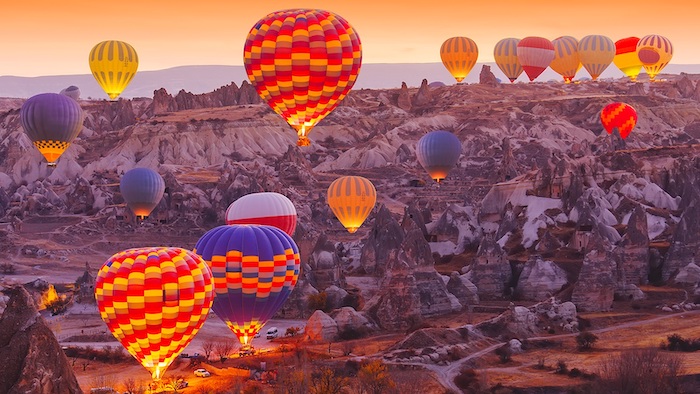 The great geological diversity of Turkey allows in addition to heavenly beaches, to travel between semi-arid steppes, snow-capped mountains, and green meadows and to do various activities such as scuba diving, surfing, paragliding, hot air ballooning but also hiking and skiing.

Climate: the best time to go

In Istanbul as well as on the Aegean and Mediterranean coast the best seasons are in spring and autumn. The climate is milder and fewer tourists. Prices are also more attractive in May, June, September, and October. The high season in Turkey is from April to October and the low season from October to April. 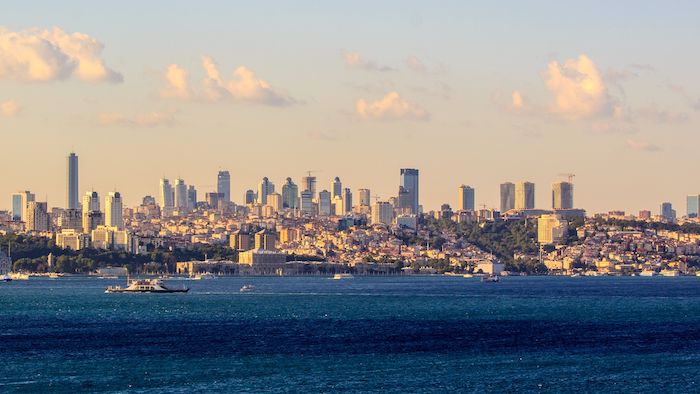 Turkey has different climates depending on its regions.

Eastern Thrace located towards Bulgaria has a climate with cold winters and hot summers with a light breeze.

Istanbul and its region are very pleasant in spring and autumn, the winters are relatively cold with an average of 15 days of snow per year and hot and heavy summers.

The Black Sea coast in northeastern Turkey, close to Georgia, has a pontine climate with abundant rain throughout the year.

In the west, in cities like Izmir or Bodrum the temperatures in winter are mild and high in summer but at times with a cool wind coming from the north which is called “Meltem” in Turkish. The Aegean Sea is not very hot which allows you to cool down during the heat.

On the south coast of Turkey, the climate is the Mediterranean as in Izmir and Bodrum the winters are mild and the summers are hot. As the north wind is not present the sea heats up easily and can reach 26°C from July to September. 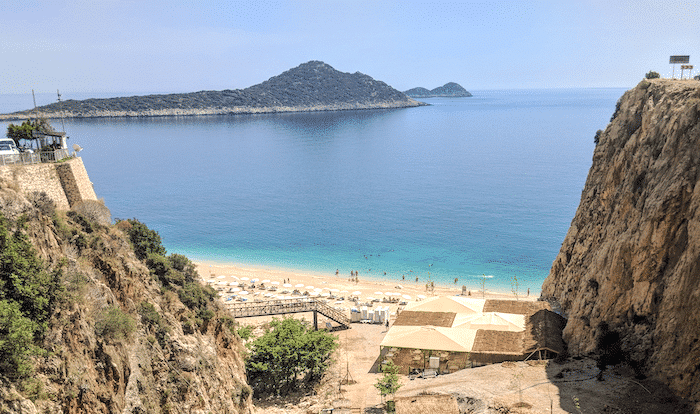 Kaputaş beach next to Kaş.

Ankara and Cappadocia, or more broadly the Anatolian plateau have a continental climate. Winters are long and harsh with snow and hot, dry summers with cool temperatures at night of around 15°C.

The eastern region near the borders of Armenia and Iran has the coldest winters in Turkey due to the altitude and the frigid air mass that comes from Russia.

Southeast near Syria and Iraq have fairly cold winters with an average close to 0°C. Summers are hot with temperatures that can exceed 45°C.

Here are the average temperatures of some cities in Turkey: 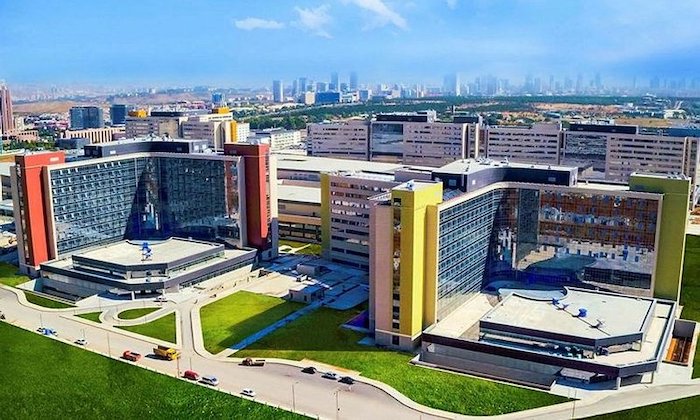 One of the new public hospitals in Ankara, designed to be the largest in Europe.

The health system in Turkey is very developed, social security is free, and for everyone. The country is one of the most important destinations in the world for medical tourism. There is no compulsory vaccine required before your stay. There are a few significant health risks, but the most common are hepatitis A and typhoid and other food and waterborne diseases. We do not recommend drinking tap water, which is generally not drinkable because it is too chlorinated.

There are many pharmacies in Turkey (in Turkish “eczane”) that sell drugs and antibiotics often without prescriptions at cheap prices.

If however, you have to go to the hospital, Turkey has many public hospitals. There are also modern private clinics in major cities at more expensive rates.

Here is the list of emergency numbers in Turkey: 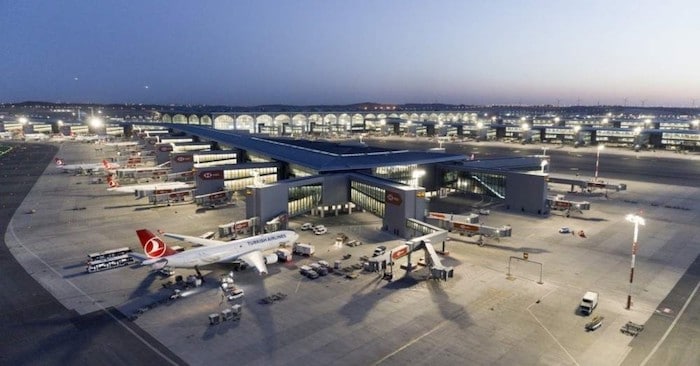 The new Istanbul airport is one of the largest in the world and Turkish Airlines, the national airline, is the company serving most destinations across the globe.

The air route is the fastest solution for travel between regions and cities in Turkey. In fact, the country covers more than 780,000 km2. There are 46 airports throughout Turkey. Turkish Airlines as well as “low-cost” companies such as Onur Air, Atlas Jet, Sun Express, Anadolu Jet, and Pegasus offer internal flights at attractive prices.

The bus is widely used by Turks for traveling. It’s a good way to travel and enjoy the scenery. The comfort of the buses depends on the private company, companies such as Kamil Koç, Varan, and Ulusoy are safe with buses generally equipped with a TV screen, tea, and coffee service which pass through the rows several times depending on the duration of the path.

Car rental is also a good way to get around, the roads are well maintained in Turkey and the rates are affordable, especially with companies like Avis, Hertz or Budget, this allows you to see the country without going through major tourist routes. 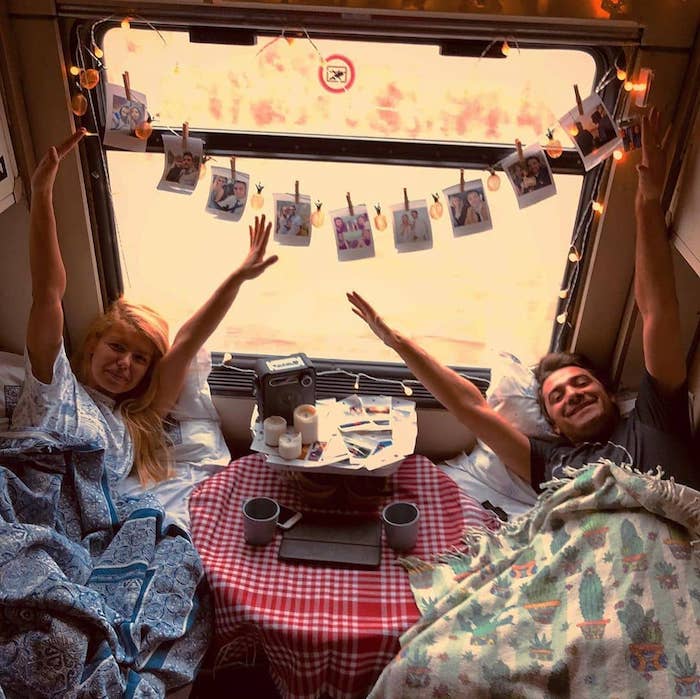 Wake-up call aboard the Doğu Ekspresi (Orient Express), linking Ankara to the snowy mountains of Kars.

The rail network is still underdeveloped despite the plans and construction of high-speed lines by the company TCDD.

To get around Istanbul, don’t hesitate to consult our guide to public transportation.