Sweets, candies and other delicacies of Turkish cuisine:

Among all the diversity and the culinary richness that you will find during your stay, don’t miss Turkish desserts.

In Turkey, desserts and sweets are often consumed between meals, in the afternoon, with tea or coffee (Turkish coffee, of course!). Such as many Turkish dishes,  most of the Turkish desserts can be found in other countries of the region (Greece, the Balkans, Armenia, Lebanon, Israel, and Syria) due to a common Byzantine and Ottoman past.

Most of you probably know the famous baklavas and Turkish delights, and for some the künefe, but you will see that the Turkish cuisine also offers surprising desserts with pumpkin, cheese, and even chicken breast.

Love it or not, Turkish desserts are worth tasting and will not let you indifferent. Here’s an overview of the desserts that you can come across in the windows or menus of Istanbul’s restaurants. 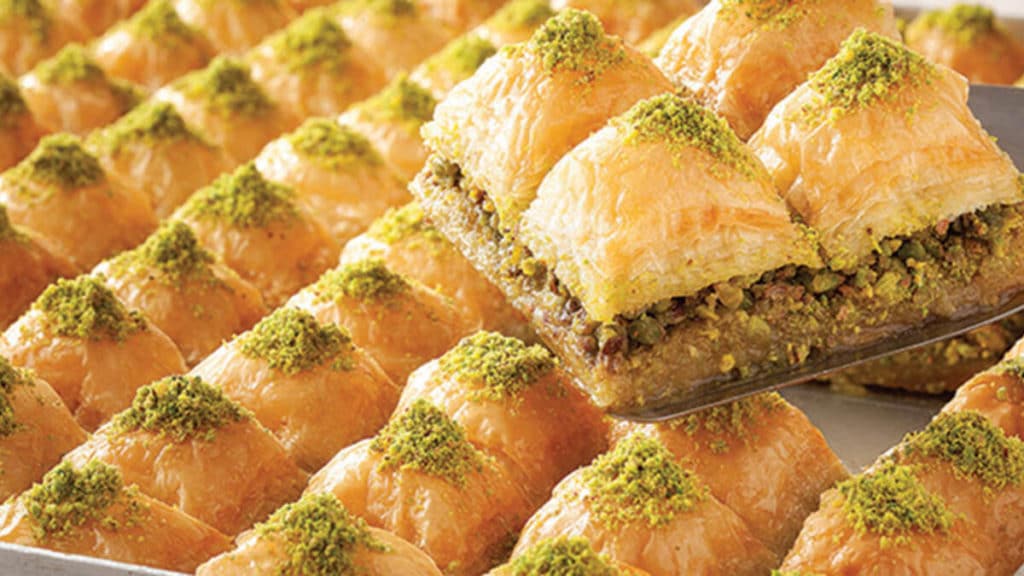 This is by far the most famous Turkish dessert. Its origins date back from the time of the Byzantine Empire, although its shape and current recipe were developed during the Ottoman Empire.

The baklava can be compared to “mille–feuille” of phyllo dough (yufka). In Turkey, it is traditionally prepared by stuffing pistachios, nuts, or more rarely almonds or hazelnuts between layers of yufka leaves. The city of Gaziantep in southeastern Turkey is famous for its baklava with pistachios and considers itself as the birthplace of this dish.

Although it can be found everywhere, it is very hard to do well and must be eaten fresh out of the oven.

The künefe is a sort of cake that is traditionally eaten in kebab restaurants. It is usually not found in pastries, because it must be eaten hot. Originally from the south of Turkey, it is made from angel hair, a Turkish cheese called dil peynir (local version of mozzarella) butter, and sugar syrup. We strongly recommend you to taste one with warm Turkish tea. 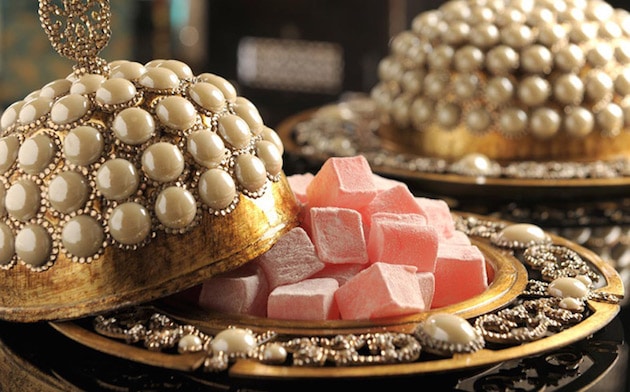 Like the baklava, Turkish delights are sweets known worldwide and spread throughout the Mediterranean basin, but they are originally from Istanbul. They were invented in 1776 by the Ottoman confectioner: Hacı Bekir.

First known as the “rahat lokum”, meaning “rest of the throat” in Turkish, because these fluffy bites were nice to chew, the Turkish delight is made from cornstarch, sugar, and fruit paste or nuts. It was a widespread candy among the ladies of high society during their afternoon teas. Turkish delights were also used as a love proof among couples.

This candy made the happiness and success of Hacı Bekir and his shop (which still exists in the Eminönü district). He was also appointed chief confessor of the Court of Sultan Mahmud II.

Today loukoums can be found everywhere in the tourist district of Sultanahmet, including the Spice Bazaar, but we recommend you to prefer small boutiques in less touristic neighborhoods offering only Turkish Delight because they are of higher quality, made without sweeteners and artificial preservatives. 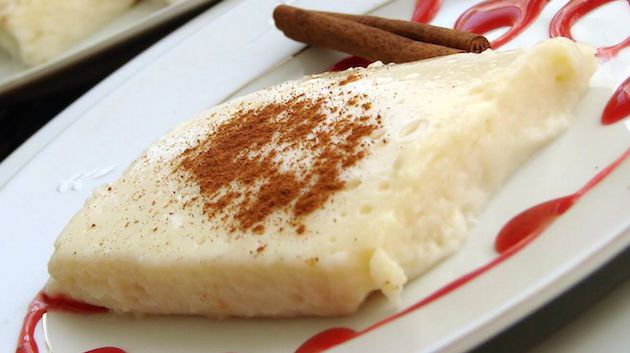 This is one of the most popular desserts in Turkey. It is very original because it is a kind of pudding made from chicken breast, rice, milk, sugar, and cinnamon. “Tavuk göğsü” means “chicken breast”.

The legend says that one night the Sultan was craving for something sweet but the cooks of the palace were in a panic because there were not enough ingredients to make a pastry. They had the idea to use chicken breasts to create this unusual dessert.

In reality, tavuk göğüsü is very similar to blancmange, an English dessert from the Middle Ages. While this might seem unappetizing, we recommend you to taste one during your stay in Istanbul, you will be surprised!

The güllaç is an Ottoman dessert that is found especially during the month of Ramadan, it is cited in a cookbook retracing the banquet celebrating the circumcision of the son of Suleiman the Magnificent in 1539.

Considered as the ancestor of the baklava, the güllaç whose etymology comes from “güllü-aş” or “rose meal” has a unique texture with ingredients such as rose water, walnut, pomegranate, and milk. You can also find other fruits in some variants.

To prepare güllaç you must dip very thin sheets of phyllo dough in some sweet milk, then once well softened, superimpose them in a plate. Once in every two or three sheets of phyllo dough, you sprinkle walnuts, hazelnuts, pistachios, ground almonds, or coconut powder. Then the dish is covered with the milk used for dipping, fragrant rosewater, and/or vanilla. Everything is usually decorated with a line of chopped pistachios and a candied cherry (or pomegranate seeds, if in season). 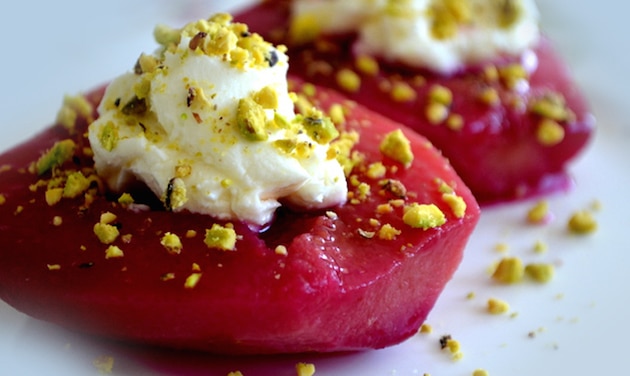 “Ayva tatlısı” means quince dessert. These are half quinces cooked in a light syrup, then in the oven, and finally into a thicker syrup. After over an hour of cooking, the quince is very tender and sweet, and is eaten with a spoon and always served with “kaymak” which is a delicious buffalo milk cream. It is also sprinkled with pistachios or walnuts.

There is also an alternative version with pumpkins called “kabak tatlısı”. 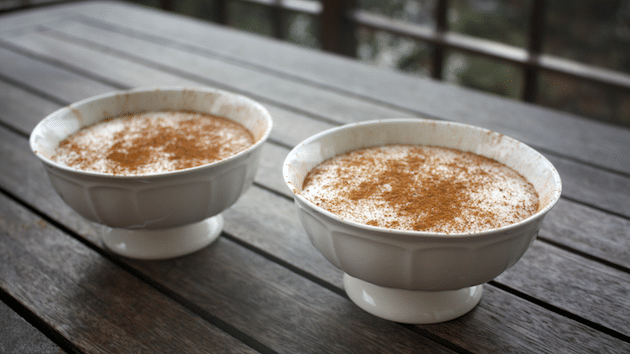 The muhallebi is a milk-based pudding, rice flour, and mastic. It is a thick cream that is usually flavored with rose, orange blossom, saffron, or cinnamon. It is a perfect refreshing dessert during summer, with pistachios often added on top. 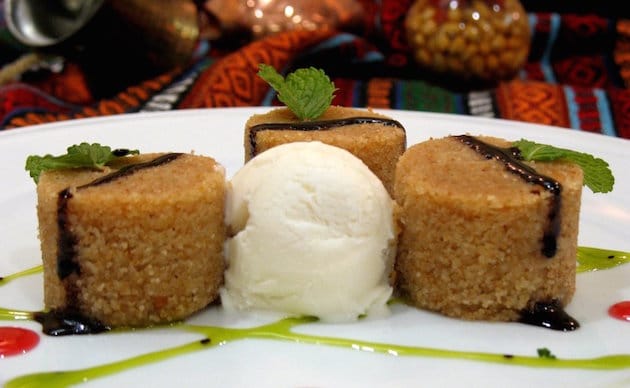 You can see it everywhere in Turkey, helva, whose etymology comes from the Arabic “halva” which means sweet, designates several desserts made with tahini (sesame paste). These are mostly consumed outside meals. The three types of most common helvas are :

– Tahin helvası: it is a compact helva with a sesame base. It is usually sold in the markets and in candy shops.

– İrmik helvası: it is a helva made of semolina also called the “winter helva”, it is often served with a scoop of ice cream.

– Un helvası: it is made from wheat flour. You won’t find it in-store, as it is a homemade dessert. It is a Muslim tradition to prepare helva and distribute it to neighbors the 7th day, 40th day, and year following a death.

It’s the big trend in Istanbul, the trileçe is a cake from the Balkans, and literally invaded the city. From the great Bosphorus palaces to small traditional restaurants, everyone is serving trileçe. It is not clear how and why the fashion of the trileçe began in Istanbul, but it is most probably the Albanian immigrants who were preparing at the ones who reintroduced it in Turkish kitchens.

The trileçe is a soft cake like a tiramisu made from three different kinds of milk (cow’s milk, sheep and buffalo milk) with a caramel layer on top.

We hope this small preview of Turkish desserts make you want to taste them all.

There are also many more that we couldn’t about such as the lokmas, the profiteroles, the kazandibi, and many others because we should then write an encyclopedia on Turkish desserts.

Share with us in comments on your culinary experiences of Istanbul!