Down the Beyoglu district, on the banks of the Bosphorus and just in front of Old Town are the neighborhoods Karaköy and Tophane, two neighborhoods that besides being among the oldest of Istanbul are also among the most interesting to discover.

Karaköy is located right in front of the old town, near the Galata Bridge and down the famous Tower of the same name. It covers an area from the banks of the Golden Horn to the Bosphorus. The first traces of urbanization dates back to the Byzantine Empire, it is therefore one of the most historical and important places of the city. It is still a condensed of Istanbul with different populations living close to each other.

As early as the 13th century its location gave him the primary role of the port and the commercial center of Constantinople. Populated at that time by the Genoese, the area is built on the model of an Italian city. The port grew rapidly and became one of the largest in Europe. He welcomed throughout its history different communities fleeing wars or other disasters, including the Jewish, Greek, or Russian. It was a commercial area, rich and very dynamic.

These communities have left an indelible architectural and religious heritage in this area. The presence of numerous churches and synagogues attests to this cosmopolitan past but also the freedoms guaranteed by the Sultans to the different religious groups.

After a long period of decline following the fall of the Ottoman Empire in 1923, the opening in 2004 of the Museum of Modern Art in the old docks has given life again to the neighborhood by radically transforming it to one of the cultural and artistic center of the city. The Istanbul Modern is a beautiful museum not to miss if you like contemporary art. The entrance is 15 TL, and is closed on Mondays. The museum’s restaurant is also very nice to eat on the Bosphorus shore (when there are no large cruise ships ahead of it). For more informations : www.istanbulmodern.org/en

The little streets adjacent to the Museum of Modern Art are quickly “hipsterized” and the art galleries, cafes and restaurants flourish alongside more traditional shops. 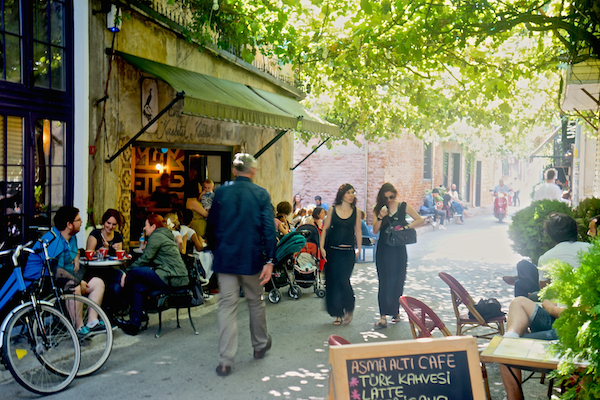 A whole new population of young people of Istanbul is now meeting there for a coffee or to work in the many shared office concepts. It’s a little residential area in which life unfolds quietly its the charming terraces. 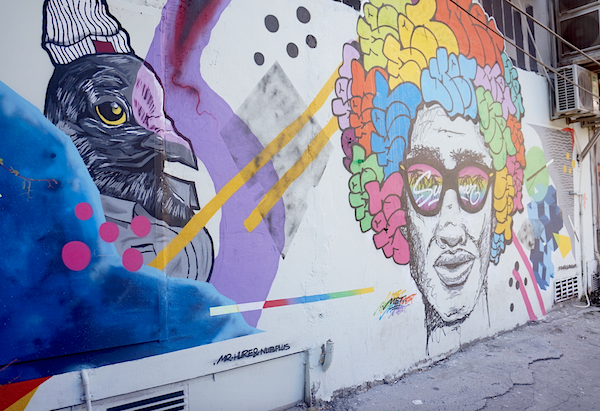 Street-art is a global phenomenon that did not miss Istanbul and particularly Karaköy. It has been now several years that Turkish street artists have made a name for themselves and perform their art freely in the streets, some shop owners even pay for it. Some little streets give the impression of being in open-air galleries. 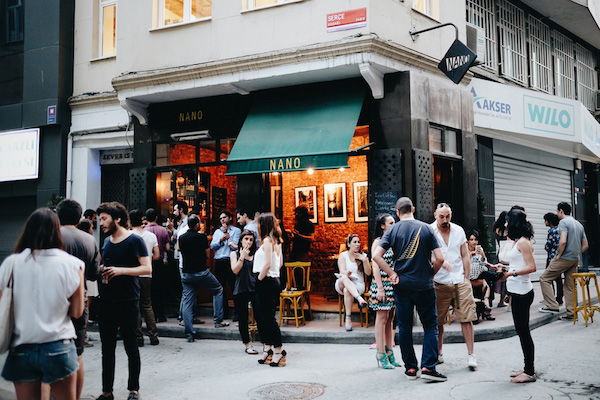 Karaköy is also currently one of the best places to be in Istanbul at night. The weekends evenings it is lively and perfect for partying until dawn in clubs like Mitte, Goya or Colony. You can find some great restaurants in our articles: “breakfast (or brunch)” and “going out in Beyoglu“.

The other part of Karaköy on the side of the Golden Horn at the bottom of the Galata Tower has developed particularly in the 19th century by becoming the financial center of the Ottoman Empire under the leadership of the great families from the Jewish communities. He quickly became a stronghold of world finance, a kind of an Ottoman Wall Street. 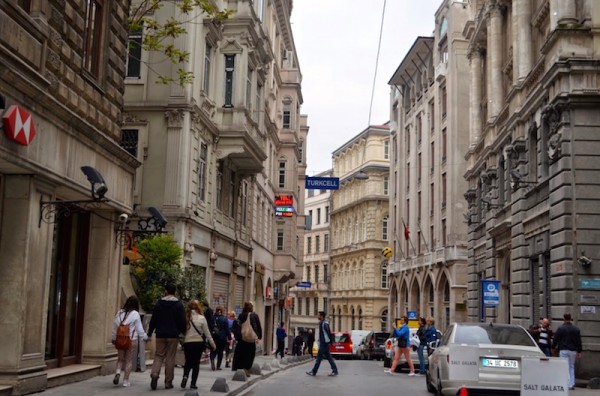 You can see the heart of the financial center by visiting the street “Bankalar Caddesi” (Banks street) where you will discover the old imposing headquarters of major banks and insurance.

On this street you will also find the famous Camondo stairs that are named after the family of the bankers of the Ottoman Court, which had built the stairs to reach their apartments at the foot of the Galata Tower. 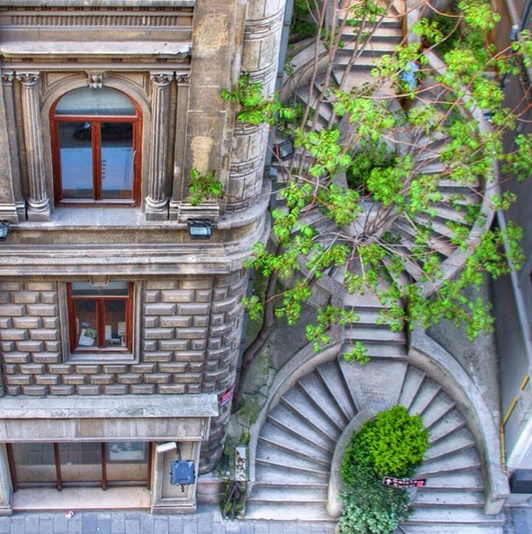 For those who are interested in global finance, the former building of the Ottoman’s Central Bank is now the property of the Salt Galata foundation and houses the Museum of the Ottoman Bank.

Down the Banks street, on the shores of the Golden Horn, there is a part of the city that was abandoned by communities and was gradually populated by Turks from the working class who opened hundreds of small shops of tools of all kinds, giving the area the appearance of an open-air flea market. 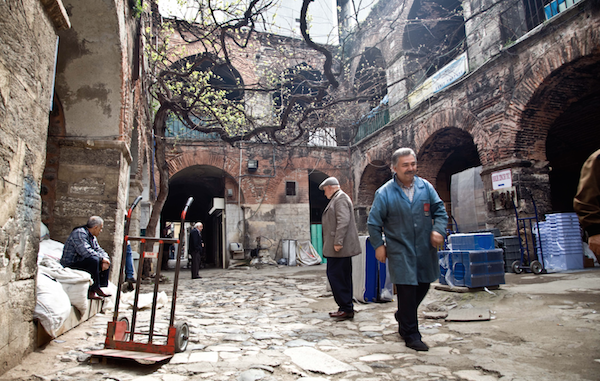 Today the Karaköy district is very wide and multifaceted. In addition to its rich past it is now a good synthesis of Istanbul life, combining tradition and modernity.

Just above Karaköy, there is a district that developed after the capture of Constantinople by the Ottomans. They set up a large cannon foundry (“Tophane-I-Amire”) under the reign of Sultan Mehmet II the Conqueror (the Sultan who conquered Constantinople).

This foundry is the starting point of this district whose function was the production and storage of the arsenal of the Empire. Tophane literally means “cannonballs deposit”. It is a building that has a typical Ottoman architectural style, and which today belongs to the school of Fine Arts “Mimar Sinan”, it also houses an exhibition center which hosted exhibitions of artists such as Dali, Michelangelo, Leonardo and many others.

Landlocked in the middle of mainly non-Muslim communities populated areas (as Karaköy) Tophane’s population was composed mostly by Turks from the provinces of the Empire looking for work. It was a Turkish bastion to remind Latins the power and the domination of the Empire.

You will see also several mosques, including a particularly interesting one, the Nusretiye Mosque which was built in 1825 by Kirkor Baylan. The Balyans were a large family of Armenian architects who have served the sultans for almost a century. Their works are characterized by a pronounced baroque influence.

Although its recent developments, it is a district that remains popular and conservative, its nightlife is also almost non-existent. On the other hand during daytime the neighborhood is full of life, its streets are lively and noisy punctuated by the screaming street vendors. 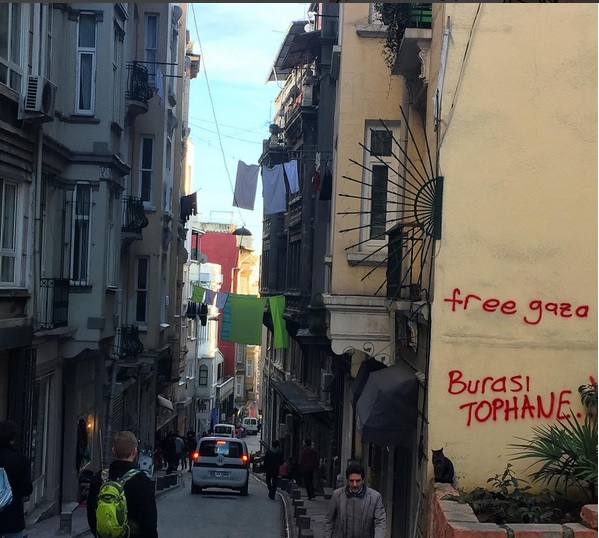 It’s on its main street, the Bogazkesen Caddesi, that you will feel the transformation of the neighborhood. You will discover some little art galleries, design shops and restaurants cohabiting with other more traditional institutions. The mixture of a conservative population with an artist population is striking and cohabitation seems to work.

At the bottom of Tophane is the historic and religious Kılıç Ali Paşa complex built by the greatest Ottoman architect: Sinan. The complex includes a mosque, a fountain and a magnificent Turkish bath dating from 1583, the Kılıç Ali Paşa Hamamı.  The place was renovated in 2014, it is one of the most beautiful hammam in Istanbul, and the quality of the service is nice.

We strongly advice you not to go in small hookahs shops between the complex and the modern art museum, they are very touristic, and some of the merchants are not very honest.

Visiting this area brings you a new perspective on the city and its history. it will also make you aware of the cultural and artistic development of Istanbul while reminding you that every corner is part of the rich history Istanbul

Visit Istanbul: Sultanahmet The Sultanahmet district is the historic district of Istanbul. There are so many things to visit that you can easily spend the week there, however, we recommend that you do not spend more than half of your holiday in...

Visit the neighborhoods of the Bosphorus

Visit Istanbul: the Bosphorus Coming to Istanbul without visiting the neighborhoods alongside the Bosphorus would be a big loss. Most of the tourists only do a boat trip on the Strait, and unfortunately, they miss the magic of these neighborhoods....

Visit Istanbul: the Anatolian side Istanbul is the only megalopolis in the world that straddles two continents. Europe and Asia are separated by the Bosphorus Strait, which connects the Marmara Sea and the Black Sea. There are three very large...