During your stay, you cannot miss the visit of the neighborhoods that make up the Beyoğlu district. Especially famous for the square of Taksim and the great pedestrian avenue of Istiklal, Beyoğlu which extends to the entrance of the Golden Horn in front of the bridge of Galata is much more than that.

Composed of a great variety and diversity of neighborhoods of which the most famous are Galata, Cihangir, or Karaköy, this area is fundamental in the history of Istanbul. Symbol of the heyday of Constantinople, but also of the decline of Istanbul in the 90s, it is the thermometer of the city. To understand Beyoğlu is to understand the history of the city and its actuality.

One of the first places that recall the importance of this area, is the district of Karaköy where you will find the imposing Banks Street (Bankalar Caddesi) which symbol is the former headquarters of the Imperial Ottoman Bank. Designed by the famous architect Alexandre Vallaury, this imposing building with its neo-classical and neo-Renaissance facade bears witness to the glorious past of the Empire. 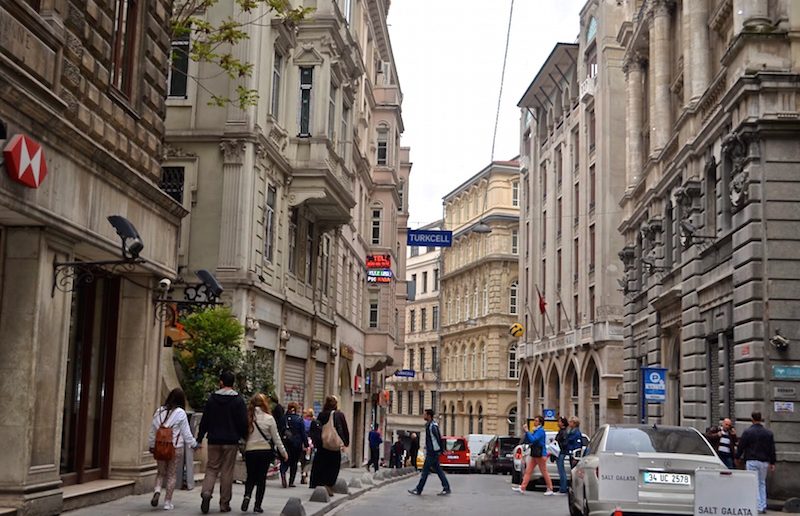 The Banks Street of Karaköy.

Since the 2000s under the leadership of the SALT Foundation, it has hosted an exciting museum on the history of the Bank and more generally of finance at that time. Very well documented, it is a journey through time, you can also discover the imposing chests of the time (the entrance is free and the building is open every day except Mondays). The building is also a real place of life, a library frequented by students, a café, and temporary exhibitions continue to perpetuate the life of this important place and offer the face of a young and dynamic Istanbul.

Just above this street by taking the famous Camondo stairs built by the large Jewish banker family of the same name, you reach the Galata neighborhood and its famous tower. Built by the Genoese in 1348, it fulfilled several functions throughout its existence: lighthouse, observation post to fight against fires, and also a prison to end up being an astronomical observatory. Today, you can climb up to admire a 360° panorama of the city where the vastness of Istanbul still fascinates.

Galata is one of the oldest areas of Istanbul, the first traces of dwellings go back several centuries BC, but the community that has most marked its history are the Genoese who settled there from 1250 and developed it on the model of a western city. Located on a hillside, the maze of cobbled streets, bordered by high stone houses gives it a unique charm. Still inhabited by well-to-do inhabitants, it subsequently welcomed a great diversity of communities including many Greeks and Jews, who appreciated the good life and freedom granted by the Empire. Taksim Square and Istiklal Avenue pedestrian streets are the centers of Istanbul. This square and street are crowded day and night.

After a strong period of decline from the 1950s onwards, this district once again experienced its glory in the early 2000s and is now popular with expatriates, fashion, and film industry people. However, Galata remains an authentic neighborhood, where all the components of Turkish society are gathered, alongside the many cafes, restaurants, shops, and concept stores, you will find small local shops, Turkish tea rooms, and small craftsmen who recall the transformation of the area from the 1950s.

A stone’s throw from the tower, one of the most beautiful streets is without a doubt that of Serdar-I-Ekrem Street where the majority of the buildings are perfectly renovated and which shows what could be living here. To enjoy a spectacular view of the old town, head to the terrace of the Georges Hotel Galata, run by Alex, a Franco-Turkish who opened this charming boutique hotel a few years ago. It is a perfect and sumptuous place to stay as a couple.

The major symbol of Beyoğlu, and one of the symbols of Istanbul, is the pedestrian avenue of Istiklal (Avenue of Independence), which is more than one kilometer long and traversed every day by hundreds of thousands of people. This avenue, once a symbol of the bourgeoisie and refinement, is now home to all the major international and Turkish brands, making it a veritable temple of consumerism.

Despite all its charm has not disappeared: the beauty of the buildings, the many embassies, recall the glorious past of this street formerly called Pera Avenue. Another symbol of the Istiklal and its aura is the Galatasaray  Highschool which is the only French-speaking public high school in Turkey. It is also one of the most famous, it was founded under the Ottoman Empire and it provided an already very popular education.

The presence of numerous religious buildings on Istiklal and on the alleys that adjoin it, recalls the cosmopolitanism of Constantinople, and the importance of religions. Among the best known, you can visit the Church of Saint Anthony of Padua hidden behind a wrought iron gate, it is one of the largest Catholic churches in the city. Built-in 1913 in the Italian Gothic Revival style, it houses various Catholic communities.

Church of Saint Anthony of Padua.

Another symbol of this avenue, which recalls the great hours of Istiklal, and its importance in trade are the many passages (small walking galleries) that border it. The best known is probably the Çicek Pasajı (the passage to the flowers), the famous passage of rococo style. It now hosts a large number of restaurants of average quality, it is very touristy, but the passage is very beautiful. Atlas Pasajı, Aznavur Pasajı, and Hazzo Pulo Pasajı are also worth a visit.

In this area, to eat especially for lunch, avoid Istiklal Avenue, and prefer the small streets of Nevizade (just behind Istiklal) next to the fish market where go to eat a dürüm (meat wrap) in Dürümzade (see the article on street food) if you want to taste authentic good Turkish cuisine, go to Hacı Abdullah (see the article of other specialties).

A few years ago, Istiklal and the small alleys that surround it were also famous for an ever-bustling nightlife. However, while previously the party was continuous throughout the week, following political decisions and the tragic events of 2016, this is less and less the case, and the Istanbulities prefer to go out to more local neighborhoods like Besiktaş, or Kadıköy on the Asian shore.

Parallel to Istiklal, in the direction of the Bosphorus is the neighborhood of Cihangir which is one of our favorites. It is one of the fashionable districts for several years, it dominates the Bosphorus and offers an exceptional panorama of the city. The stars of Turkish TV, as well as influential people from the arts, fashion and entertainment world, or even expatriates, live there. Here a different atmosphere reigns, cafes, bars and its bohemian way of life gives it the look of the Marais in Paris or Soho in New York. If the weather is nice, head to the 5. Kat Bar-Restaurant, where you can have a coffee or an aperitif on their roof and enjoy a beautiful view.

View from the rooftop of 5. Kat in Cihangir.

It is also a very nice area to spend the evening, there are several bars and restaurants very nice, one of our favorites is Demeti, which offers mezes and fish in a warm setting. Please note that this restaurant also has a small balcony with beautiful views of Istanbul. For an evening drink, we recommend Geyik or 21 bars.

Summer night outside the Geyik bar.

Right next to Cihangir, another absolutely charming neighborhood is Çukurcuma. Today it is known as the antique shop district, you will find absolutely everything, do not hesitate to haggle. You can also visit the Museum of Innocence (Masumiyet Müzesi) opened in April 2012. The name of the museum is the title of a book by the famous Turkish writer Orhan Pamuk, it gathers many objects that are mentioned in the story.

The beauty and diversity of these different neighborhoods testify to the rich heritage left by the different communities throughout history, it is definitely a visit to be programmed during your stay.

Visit Istanbul: Sultanahmet The Sultanahmet district is the historic district of Istanbul. There are so many things to visit that you can easily spend the week there, however, we recommend that you do not spend more than half of your holiday in...

Visit the neighborhoods of the Bosphorus

Visit Istanbul: the Bosphorus Coming to Istanbul without visiting the neighborhoods alongside the Bosphorus would be a big loss. Most of the tourists only do a boat trip on the Strait, and unfortunately, they miss the magic of these neighborhoods....

Visit Istanbul: the Anatolian side Istanbul is the only megalopolis in the world that straddles two continents. Europe and Asia are separated by the Bosphorus Strait, which connects the Marmara Sea and the Black Sea. There are three very large...