Visit Istanbul: the Anatolian side

Istanbul is the only megalopolis in the world that straddles two continents. Europe and Asia are separated by the Bosphorus Strait, which connects the Marmara Sea and the Black Sea. There are three very large suspension bridges that connect the European and Asian shores of Istanbul, but also vapors (ferries in Turkish) that go all day round (see our article on public transport).

In the collective unconscious, the Asian shore of Istanbul is wrongly considered more “oriental” than its European sister. What is really striking in Istanbul and which in our opinion constitutes its main beauty is the cohabitation between diverse and varied populations. In a very short time, you move from a conservative neighborhood like Üsküdar to a modern neighborhood like Moda.

The classic tourist guides usually completely hide this part of the city, so we decided to make a summary of what you can find there. 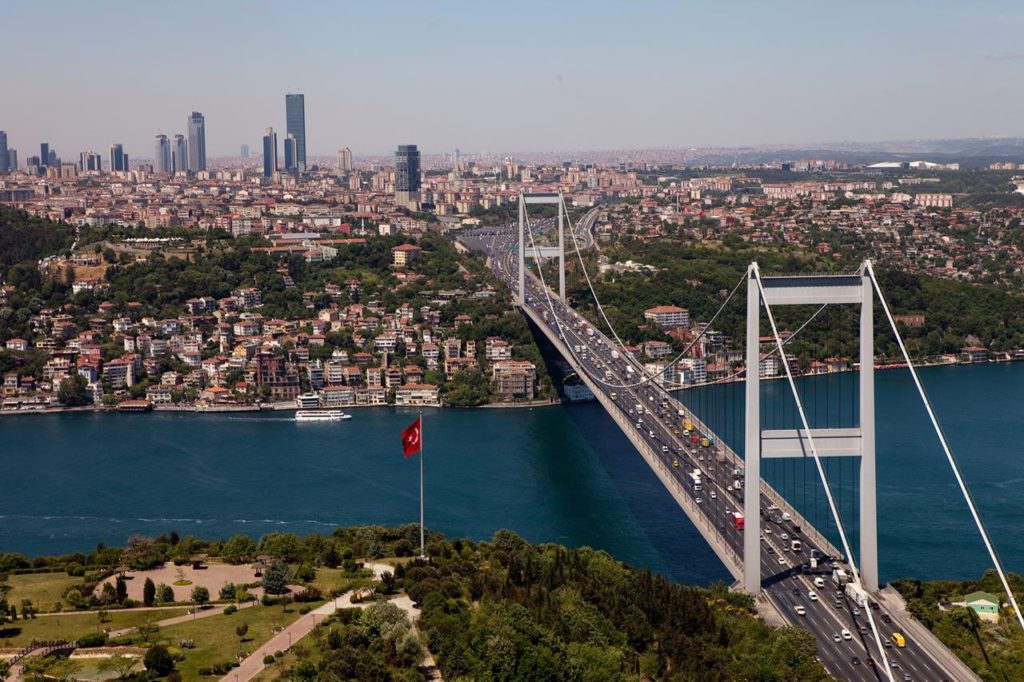 One of Istanbul’s three bridges connecting the European and Asian shores.

Kadıköy is the nerve center of Asia, it is the Anatolian Taksim. In ancient times Kadıköy was called Chalcedon and according to the legend it was nicknamed the city of the blind because Herodotus would have said that the Chalcedonians who had built their city 17 years before Byzantium were probably blind for choosing the location of the city in A situation that is so little strategic away from the Detroit. It is more pleasant to go to Kadıköy by steamer (ferry) thanks to which you will have the opportunity to see the Maiden’s Tower (Kız Kulesi) or the splendid Haydarpaşa station.

Although very dense, it is very pleasant to stroll through the small alleys in the center of this lively area. You will find a different atmosphere from Beyoğlu or Sultanahmet. One of the main “attractions” is the Kadıköy market. It is one of the most important in the city. This is a good opportunity to discover Turkish products, do not hesitate to ask to taste before buying. The Kadıköy Market on Hasırcıbaşı Street (Hasırbaşı Caddesi) is open every Tuesday.

Haydarpaşa Train Station in Istanbul, one of the most beautiful train stations in the world.

Commercial “Train de nuit” for the perfume CHANEL N°5, shot in Istanbul, in which we see the Haydarpaşa station.

For shopping enthusiasts, you should visit Bağdat Caddesi (Baghdad Avenue). Considered the “Istanbulitie Champs-Élysées”, this 6 km long avenue is home to shopping malls, luxury boutiques, cafes, and international restaurant chains. The upbeat youth of the Asian shore of Istanbul meet up on weekends to stroll, have a drink or shop.

A very nice walk to escape from the city center is that of the seaside of Caddebostan. This walk along the Marmara Sea, you will even find some small beaches. After this walk, you can go for a drink at Divan Brasserie in the marina of Kalamış. 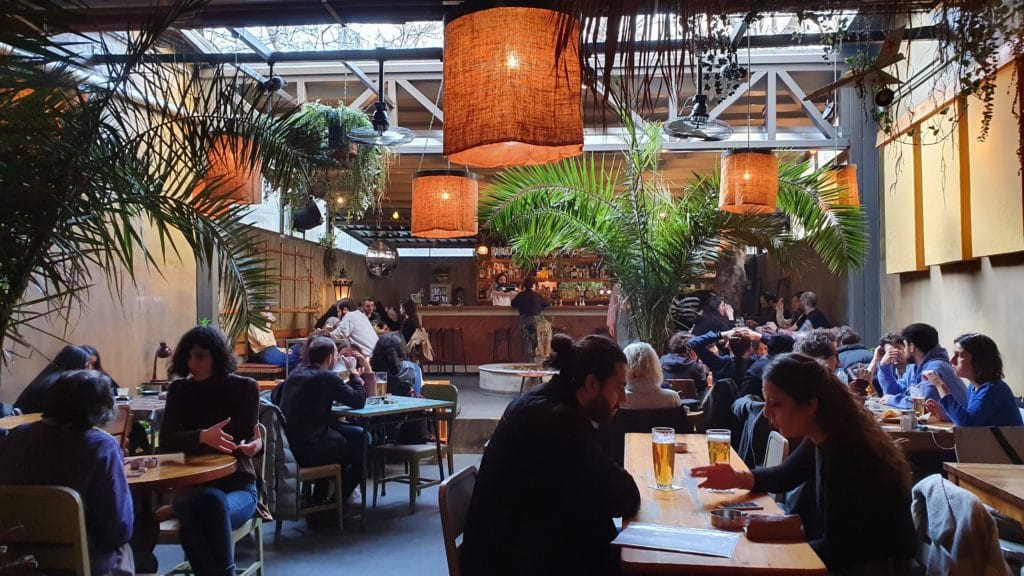 – Bina: with a small garden on the top floor, the establishment is as pleasant during the day as it is in the evening for a good coffee or a cocktail. Caferağa Mahallesi, Kadife Sokak No: 26, Kadıköy, İstanbul

– Trip Bar: a bar famous for its mulled wine but also because it is the bar of the film “Kaybedenler Kulübü”, a film about the first free Turkish radio station. Kadıköy Barlar Sokağı Kadife Sokak 10/1, İstanbul

– J Burger: opened since 1977, it is truly essential. Everything is homemade, bread, ketchup, mayonnaise, fries, and especially a sauce whose recipe is treasured! Caddebostan, Operatör Cemil Topuzlu Cd. No:51, Kadıköy, İstanbul

– Palma d’Oro: located in a beautiful villa, this restaurant offers international cuisine at affordable prices. You will find good deals such as buffet/all-you-can-eat brunch from 10:30 am to 2:30 pm or also during the week, and unlimited dessert and wine (Kavaklıdere) formula. Suadiye, Kazım Özalp Sk. No:50, Kadıköy, İstanbul

– Misina Fenerbahçe: very good fish restaurant in Fenerbahçe, the mezzés are delicious. A good address for lovers of fish and seafood. The restaurant is always very full, the best option is either to come early or to book. Fenerbahçe Mh., Dr. Faruk Ayanoğlu Cd No:36, İstanbul

The Asian side of the Bosphorus is residential and very green. You can admire beautiful houses and yalı (seafront villa) by boat. Going up the neighborhoods of the Bosphorus, you have the impression of passing from village to village.

The district of Üsküdar is a little bit the edge of the urban city. Usküdar is one of the most conservative and ancient districts of Istanbul. Unlike neighborhoods like Galata, Nisantaşı, Kadıköy or the European Bosphorus, here religion is displayed. In this area, there are more than 180 mosques. The largest and best known are the mosque of Mihrimah Sultan, built by the famous architect Sinan, it opened its doors in 1548, another large and very beautiful mosque is that of Yeni Valide built between 1708 and 1710.

An unmissable monument of the Asian bank of Istanbul is the Maiden’s Tower (Kız Kulesi). It was built on a small island on the Bosphorus in 408 BC by the Athenian general Alcibiades to control the movements of enemy ships. It was later modified and renovated by the Byzantines and Ottomans over the centuries. After being a lighthouse for centuries, it is today one of the most symbolic monuments of the city, it is also a restaurant accessible by boat.

To discover this area in depth while enjoying a wide variety of local specialties, you can take part in our culinary and cultural walk on two continents. 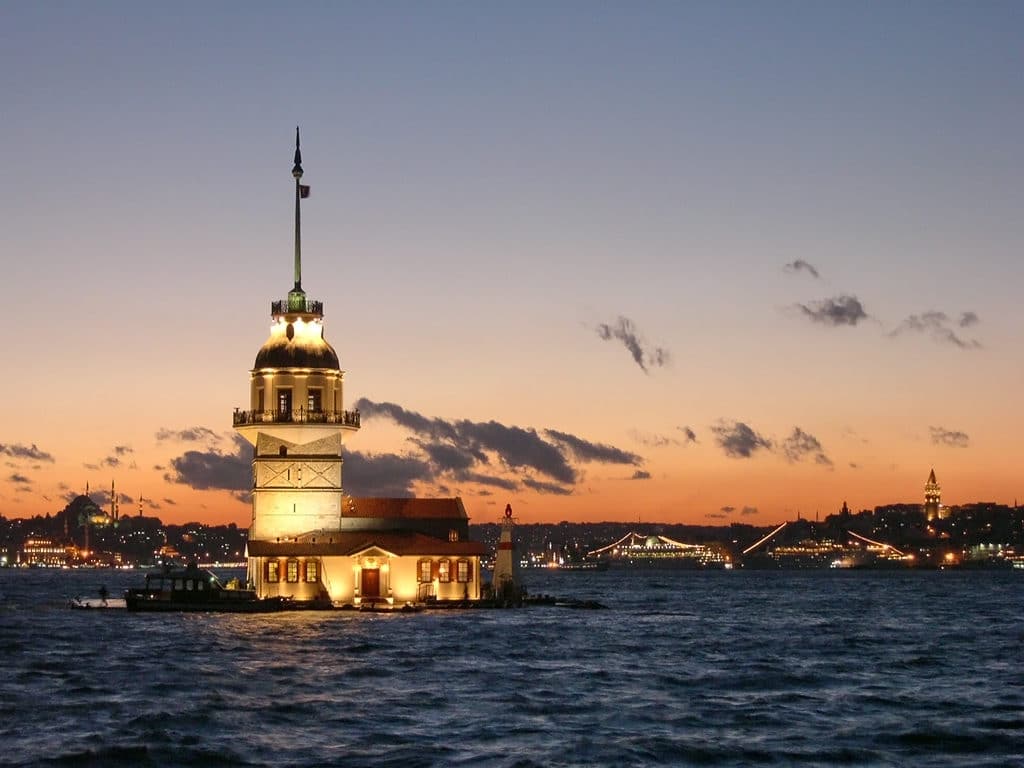 The further north you will find the district of Kuzguncuk. It is a small area of wooden houses located in a valley surrounded by forests. Kuzguncuk transports you into a universe where time seems to have stopped. It was originally the Jewish quarter that fled Europe during the Inquisition, and then it became the Armenian and Greek community. Today, most of its inhabitants are Turks from the rural exodus. You will find monuments testifying to this community past, it is one of the few places in the world where you can find mosques next to churches and synagogues. The most famous are the synagogues of Bet Yaakov (built-in 1878) and the synagogue Bet Nissim (built-in 1840), the churches of Surp Krikor Lusavoric, Avios Yorgios, and Avios Panteleimon.

The wooden houses of Kuzguncuk.

Smaller than Dolmabahçe, the palace of Beylerbeyi was the former residence of the sultans in a French neo-baroque style of the 19th century. It is possible to visit it from 9h30 to 17h the days except for Monday and Thursday.

Continuing north, you can admire the Anadolu Hisarı. It is the oldest Turkish monument in Istanbul. It was built between 1393 and 1394 by the Ottoman Sultan Bayazid as part of the preparations for the second Ottoman siege of Constantinople, which took place in 1395. Anadolu Hisarı is located at the narrowest point of the Bosphorus.

The fortress of Anadolu Hisarı.

– İsmet baba: this restaurant opened in 1951 is on the edge of the Bosphorus, and everything is absolutely delicious. Prices are reasonable. It is a traditional place, the decoration is very simple. See our article on the best fish restaurants in Istanbul. Kuzguncuk, Kuzguncuk Çarşı Cd No:1, Üsküdar, İstanbul